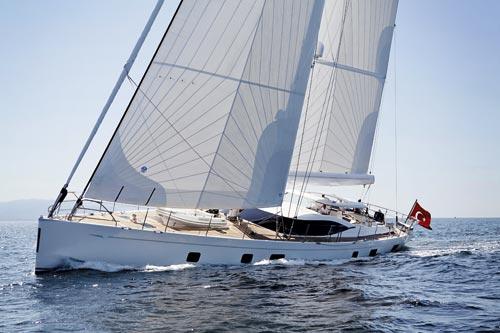 Much has been written about luxury sailboat brand Oyster’s move into the pocket superyacht arena, and with it the choice to farm out construction of its top-end models — the 100 and the 125 — to Turkish yard RMK. The RMK yard, located a short hop from Istanbul, had to learn a whole new way of yachtbuilding by developing its skills in composite construction, and the facility now boasts one of Europe’s largest ovens for post-curing the resin-infused hulls. Indeed, when the hull of the 100’s bigger sister — the 125 — was constructed it set a new world record of 6.2 tonnes of resin in one four-hour infusion.

Now, we have finally had a chance to see the result of this collaboration with the first Oyster 100, named Sarafin, taking to the waters in Turkey at the end of September. The yacht, built for an Australian owner who previously owned an Oyster 68, follows the traditional Oyster layout with a deck saloon; aft there are an owner’s cabin and two guest cabins, while the lower saloon, galley and crew cabins are found forward. Although some interior layout modifications could be made on future models — for example adding an additional guest cabin forward — Oyster is keen to stick to this basic layout in order to maintain build efficiencies. There is, of course, ample scope for customisation in terms of materials, and Sarafin features walnut and Turkish marble among its finishes.

But more importantly, how does she sail? Comfortably, would be an easy answer. Taking her out in around 20kts of breeze with the main reefed to the first batten, she sat hard on the wind at just shy of 10kts, the speed creeping up as the sheets were cracked. With the wind just abaft the beam and the reacher unfurled she hit 12kts, and there is a good chance that performance will increase as the systems and sails bed in and the crew gets more chance to push her. And if you want to see her for yourself, you might not have to wait too long. Word is she will flit between the Caribbean and the Med’ for a couple of years before heading to Australia where she will be based. By which time, I should have been able to get my hands on the 125. — Tim Thomas