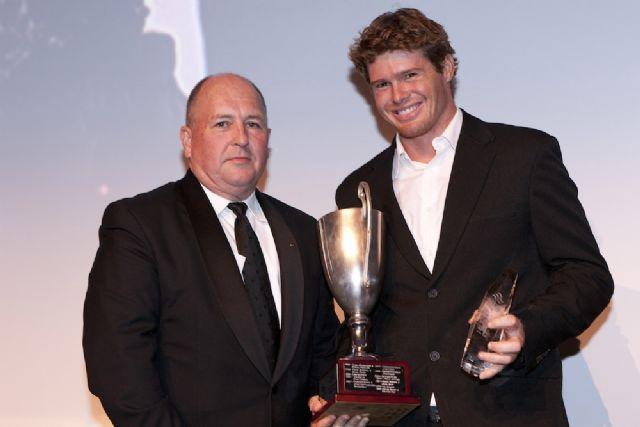 October 28: The Australian sailing community recognised excellence in the sport on Friday evening at the 2011 Australian Yachting Awards, held at Sydney’s Luna Park.

More than 230 guests from across the country celebrated another outstanding year on and off the water for Australian sailing at this year’s Australian Yachting Awards, held at Sydney’s Luna Park late last month.

Yachting Australia said it received a long list of worthy nominees with 65 for the eight categories.

The Male Sailor of the Year Award was won by triple Laser World Champion Tom Slingsby. In an outstanding year, he took out the 2010 Laser World Championship, became the first Australian to win the prestigious ISAF Rolex World Sailor of the Year Award, won the ISAF Sailing World Cup and a further two regattas at the London 2012 Olympic Games venue in Weymouth, including the official test event.

The OAMPS Insurance Brokers Youth Sailor of the Year Award was won by 420 crew Angus Galloway and Alexander Gough, following outstanding performances both at home and abroad. The pair captured the 2011 OAMPS Insurance Brokers Australian Youth Championships, before heading to Europe where they won Gold at Kiel Week in Germany before winning Bronze at the ISAF Youth Sailing World Championships. They finished the year off in style with victory in the Junior 420 European Championships in Belgium.

Australian Skud 18 crew Daniel Fitzgibbon and Liesl Tesch won the Sailor of the Year with a Disability Award after an amazing start to their sailing career together. Fitzgibbon and Tesch kicked off their partnership in style, winning Gold at the ISAF Sailing World Cup in Miami before success in a World Cup round at Weymouth, England. The pair then backed this result up a few weeks later with Bronze at the 2011 IFDS World Championship at the same venue.

Matthew Owen was named Sport Professional of the Year. Manager of the Canberra Yacht Club since 2001, Owen is now the CEO and is also the executive officer of Yachting ACT, playing a major role in local sailing.

The Sport Promotion Award was won by Victorian Gavin Wall, who works tirelessly with the Royals Training Centre, a part of the Royal Yacht Club of Victoria, to develop, promote and manage a number of successful programs.

The Volunteer Award was shared between West Australian Cherry Calcott, who couldn’t attend the event due to volunteering commitments, and Victorian John Chatham. Both Calcott and Chatham were recognised for their continual commitment to sailing.

Yachting Australia president David Gotze presented the President’s Award to Bob Oatley, owner of five times winning Sydney Hobart supermaxi Wild Oats XI, and family for their ongoing contributions to sailing both on and off the water.

Three Lifetime Achievement Awards were also presented, to Ian Kingsford-Smith, Jim Orrell and Gary Ticehurst, who was represented by his son Matthew. All three individuals have given so much to sailing over the years and Yachting Australia thanks them for the ongoing role they have played in the sport. — Craig Heydon