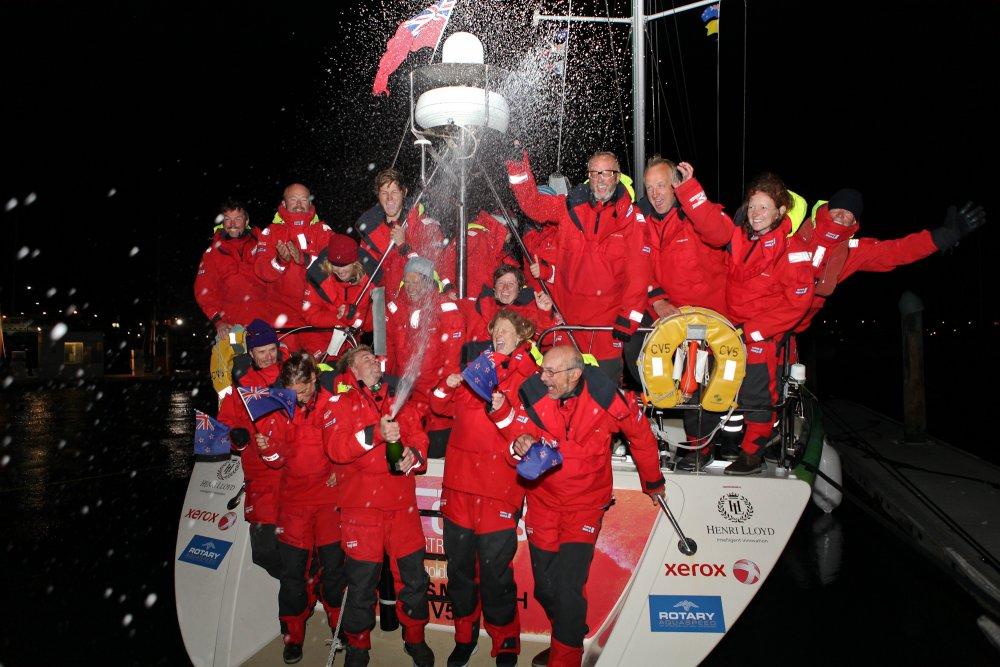 SPORT - Five wins in a row for Gold Coast Australia

Friday, November 25: It was a nail biting and frustrating finish for Gold Coast Australia, one of the ten 68-foot yachts competing in the Clipper 11-12 Round the World Yacht Race, as they closed in on the Race 5 finish line at Tauranga, New Zealand, to secure their fifth consecutive victory in the 15-race series.

Beating into a strong northwesterly breeze they crossed the finish line at 03.26 local time today.

The team had led from the start of the 3800nm stage, which set out from Geraldton, WA, 19 days ago and has seen all 10 teams face the full fury of Mother Nature as they raced across the Southern Ocean, riding out storms and surfing waves as tall as buildings. But, as they closed in on the finish line in NZ’s Bay of Plenty, the brakes went on for the front runners and they had to watch as the chasing pack closed down their lead. As they rounded the East Cape, 100nm from the finish line, disaster struck and they damaged their mainsail, forcing the team to complete the race under a much reduced sail plan.

Arriving in Tauranga Bridge Marina, the fleet’s base for the next 10 days, Tasmanian skipper Richard Hewson said, “The whole race was really hard. After we left Geraldton, we got around Cape Leeuwin and it was on. Basically it was blowing over 40kts the whole time or we were becalmed. There was nothing in between. The gusts seemed to last hours at a time.

“As we came around the East Cape we had a fair bit on and the other boats were catching us. With that bunch of five boats so close together, we could easily have gone from first to sixth place if we didn’t get everything in order so I’m really happy. The crew dug really deep and I’m very proud of them. It’s nice to have another pennant,” he said.

Gold Coast Australia’s winning streak equals that of Ras Turner and his crew on Ariel in the first edition of the event, Clipper 96. The record of six consecutive wins is held by Alex Thomson, winning skipper in Clipper 98.

Clipper 11-12 is raced by people from all walks of life, whose ages range from 18 to more than 70 and who, between them, represent more than 40 nationalities. They choose to sign up for the whole circumnavigation or one or more legs of the world’s longest yacht race.

New Zealander Fred Tooley is Clipper 11-12’s oldest crewmember, fulfilling an ambition held for more than half of his 72 years. The retail assistant from Manukau, Auckland, joined Gold Coast Australia for the race from Geraldton and will also participate in the next stage from Tauranga to Gold Coast, Queensland.

As he stepped onto home soil, an emotional Tooley said, “There’s only one phrase for it: this is something else! When I first saw New Zealand it was down by the bottom of South Island, coming around Stewart Island and I had a little cry then. I really didn’t know what to expect of myself, I was really quite surprised. With the last 20 miles and only a couple of hours to go, I sat on the side of the boat and just reflected and it’s so fantastic.

“My wife said, ‘You’ve wanted to do this for the last 35 years — go and do it.’ One of our friends said this is costing a lot of money but money is absolutely nothing to the way I feel right now. My wife will never ever know — not because I won’t tell her — she’ll just never know what she’s done for me. I’m having a little cry even now! I try to put it into words and all I can say is, ‘this is something else’. If there’s anybody thinking about it, don’t think about it, just go and do it! It’s the only way you’re going to know how I feel right now,” he said.

The parents of Tooley’s fellow Kiwi crewmember Anna Guthrie, 35, were on the dockside to welcome their daughter home. The pair had travelled from Christchurch, South Island, along with other members of the family, including Anna’s baby niece, who she will meet for the first time today.

Guthrie said, “It was very special coming into NZ and the race was very challenging. It was a bit of a contrast to my first leg down to Rio but it was really nice coming in this morning. Everyone was very excited and my folks were on the pontoons. I haven’t been home for two years, I haven’t seen them since two Christmases ago and they’ve had the earthquake in Christchurch. It’s a great surprise — I wasn’t 100 per cent sure they were going to be here so it’s really nice to see mum and dad.”

Guthrie’s family are not alone in making the trip to Tauranga; hundreds more have made their way to meet their loved ones and to enjoy an extended holiday in the Bay of Plenty area. Among the many activities on offer during the stopover, crew will visit the volcanic White Island, enjoy the Bay of Plenty’s fabulous beaches, climb Mount Maunganui, indulge in a spot of fishing and learn the art of paddle boarding.

This is the first time the Clipper Round the World Yacht Race has visited NZ since its inception in 1996 and organisers will be meeting with local businesses and government representatives to strengthen links with the region and demonstrate how partners use the event as a global platform to promote trade, tourism, culture and social inclusion.

Each yacht is sponsored by an international city, region, country or company, with many visiting Tauranga to engage with NZ businesses, trade contacts and media.

Chairman of the Clipper Race Sir Robin Knox-Johnston, the first man to sail single-handed and non-stop round the world, said: “Our sponsors raise their profile on the world stage with tangible benefits in developing trade, promoting tourism, sharing cultural experiences and involving their respective communities. It creates a powerful legacy.”

There are also a number of presentations for those interested in finding out more about what it takes to race around the world with the Clipper Race and the new fleet of 70-foot yachts that will contest the next edition of the event. They are at Royal Port Nicholson Yacht Club, Wellington; Royal New Zealand Yacht Squadron, Auckland and Tauranga Yacht and Power Boat Club.

Photo:
Gold Coast Australia crew celebrate a fifth straight victory as they arrive in Tauranga at the end of Race 5 of the Clipper 11-12 Round the World Yacht Race.