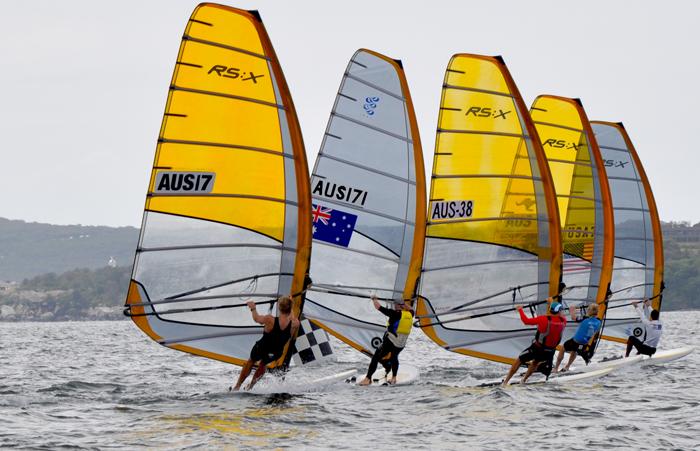 Wednesday, Nov 2: The second day of the first round of Sail Sydney saw gusts of 20-plus-knots greet the competitors mid-afternoon, making for a day of exciting racing for all classes.

The RS:X sailboards got in four races in ideal conditions that saw planing starts and plenty of action. “This was excellent racing in very exciting conditions,” commented race pro Jenni Bonnitcha.

The visiting RS:X sailors were in their element as Norwegian Sebastian Wang-Hansen took first place in the first two races, while Marco Baglione from Italy took the gun in the second two. Luke Baillie from RQYS showed excellent form with a second and a fourth keeping the visitors honest and enjoying every moment.

The large Laser fleet had three races that showed the incredible competitiveness of the class. The range of wind shifts required a course change after the first race and the southerly edging though in the afternoon showed the sailors talent.

“The conditions provided some top-level racing,” said Bonnitcha. “It is great to see all the new talent coming through.”

Cy Thompson from the US Virgin Islands took first place in race one of the Lasers, while Charlie Buckingham from the USA took races two and three. Locals James Burman from Sydney, and Matthew Wearn and Tristan Brown from Perth kept the Australians in the placings as the leader board changed each race.

Sydney sailor Alex South dominated on day two winning all three races on her Laser Radial. The placings did not change for all races as Beth Lygoe from St Lucia took three seconds followed by Nur Amirah Hamid from the Malaysian team.

Three races were also started for the Finns, with the 20kt gusts making the racing challenging. Mathew Visser took the gun in race one, with Ian McKillop and Rob McMillan rounding out the three. Race two had McMillan on top with Visser back to third and the fleet decided to retire after race three was started.

Conditions for the third day of this first round of Sail Sydney will be different again with morning rain and wind between 10 and 15kts.

Sail Sydney is one of the premier sailing events in Australia and this year is being held over two regattas. The Olympic class event is on now, with the December 16 to 18 regatta being open to all classes and entries are building fast.

Photo: The boards line up.