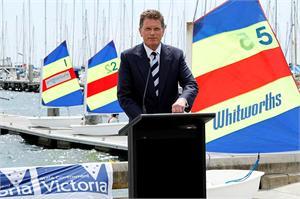 In raising the event flag the Baillieu signalled that with the support of both State and Local Government, the 168-year-old, multi-award-winning event is set to remain a permanent fixture on the Victorian Major Events calendar.

The Premier said a regatta of this size and quality reinforced Victoria’s reputation as the sporting capital of the nation, and it was great to see the Festival of Sails promoting so many family-friendly activities in conjunction with this world-class sporting event.

Event executive officer Mark Turnbull OAM says that plans are shaping up to deliver another successful event on the Victorian Major Events calendar.

“This event would not be possible if it was not for the substantial support of both the State Government and City of Greater Geelong,” said Turnbull.

“The Festival of Sails has a rich history of delivering strong economic and community benefits to the State and City of Geelong.

“Whilst the regatta element of the Festival of Sails will showcase the world’s best sailors over a week of competition on Port Phillip and Corio Bays, the event is focused on providing an opportunity for all visitors to be exposed to the wide range of accessible healthy lifestyle activities that our fantastic bays and beaches provide us,” he said.

The shoreside festival (January 26 to 29) will feature more than 60 acts across three stages, over 80 stall holders and great food and wine, all along the Geelong waterfront and RGYC, as well many family-friendly activities to keep the non-sailors entertained both on and off the water.

With consistently more than 400 yachts of all types and sizes, more than 4500 participants from around Australia and internationally, in excess of 100,000 festival spectators, and international media converge on Victoria, organisers say the Festival of Sails provides a perfect opportunity to showcase Victoria and the cities of Melbourne and Geelong, as well as fantastic regions surrounding Port Phillip and Corio Bay.