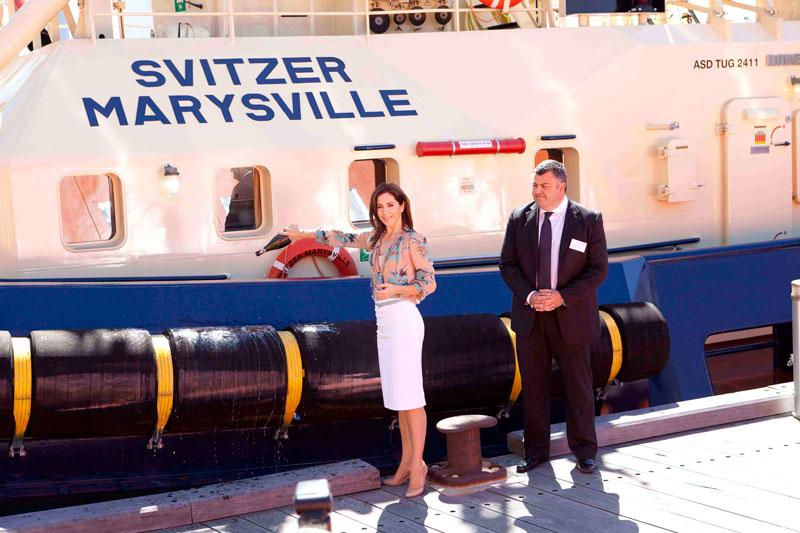 newest tugboat
SVITZER Marysville at Docklands, Melbourne, in honour of the bushfire devastated township of Marysville.

Forty-five of Marysville’s 500 people lost their lives and 90 per cent of the town’s homes and buildings were destroyed in the Black Saturday bushfires northeast of Melbourne in February 2009. The fires are among Australia’s worst-ever disasters.

SVITZER named the tug SVITZER Marysville to underscore the links between the company’s Danish heritage and its strong presence in Australia.

Australian-born Princess Mary doused the tug with champagne, before boarding for an inspection with Prince Frederick and other dignitaries, including Murrindindi Shire Mayor Peter Beales and Denmark-based SVITZER CEO Jesper Lok.

The Crown Prince Couple also met with residents of Marysville invited to Docklands for the occasion, including firefighters from Marysville Volunteer Fire Brigade and students from Marysville and Buxton Primary Schools.

“Given her disposition for providing support and inspiration to others, it is with great pride that we welcome Her Royal Highness Crown Princess Mary of Denmark,” SVITZER Australia’s MD Mark Malone told a gathering of 250 invited guests and media.

“In choosing this name, it is our pleasure and privilege to pay tribute to Marysville the town, and its people.

“We’ve learned a great deal from Marysville and its people. About suffering and surviving. Bonding and rebuilding. About what makes a community a community, in every true sense of the word.

“As maritime tradition usually dictates, all good vessels should take the name of a good lady, or location. When it came to this tug before us, we thought why not both?

“These links between Denmark and Australia meant that in selecting the name for this vessel we could not overlook the opportunity to create a working tribute to both Marysville the place and the Crown Princess,” he said.

“The symbolic significance of the event and the presence of the Crown Prince Couple has made this one of the most memorable tug naming launches in SVITZER’s 170-year history,” said Lok.

“We are indebted to the Crown Prince Couple for attending the SVITZER Marysville naming ceremony.

“We want our vessel SVITZER Marysville to be a long-lasting reminder of Marysville the town and its extraordinary people,” he said.

Built by Damen Shipyards at Song Cam Haiphong in Vietnam, SVITZER Marysville weighs
250 tonnes, has a bollard pull of 68 tonnes, is 24.5m long, and has a service speed of 12.5kts. She is powered by twin Catepillar 3516C engines.

Headquartered in Copenhagen, SVITZER said it operates a global fleet of more than 540 vessels in 35 countries and provides safety and support services at sea. Its core services include towage, harbour, emergency response and salvage.

The company said local major salvage accomplishments include the Pasha Bulker coal carrier
(Newcastle, 2007) and Shen Neng 1 coal carrier (Great Barrier Reef, 2010) refloats, and the dismantling of the burnt West Atlas oil rig (Timor Sea, 2010). It is currently working on the salvage of the Rena container carrier in the Bay of Plenty, New Zealand.