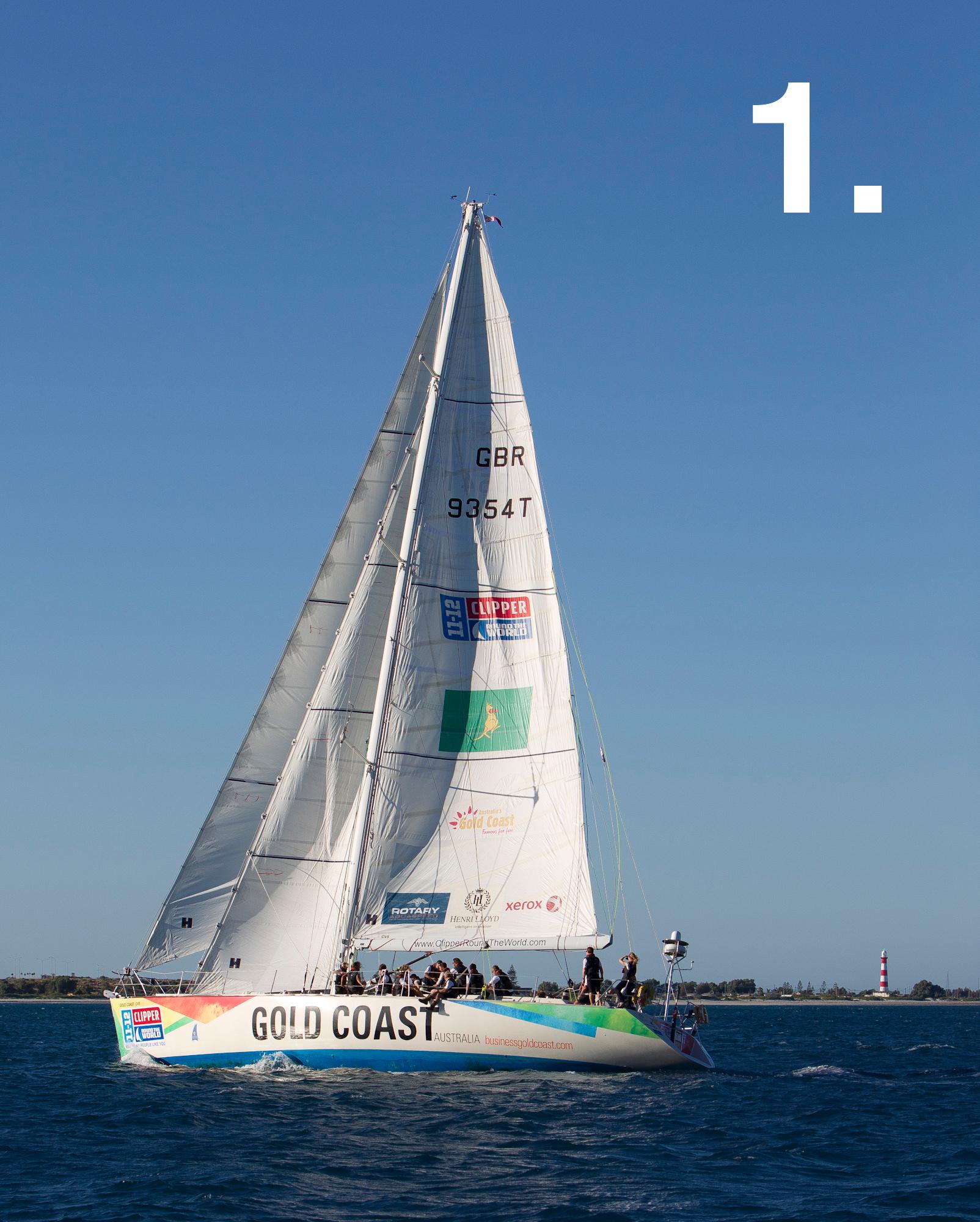 secure victory in the race from Cape Town to Geraldton as the race for the final two podium positions heats up. Notching their fourth win of the Clipper 11-12 Race, the Australian entry's crew were cheered on by a welcome party of friends, family and local residents.

With victories in every race so far during Clipper 11-12, Hewson praised his team's work ethic. "It's down to good management and good sailing. The guys pushed really hard, we're a good team and everyone works hard and really deserves this, so it's fantastic," he said.

Dutch entry, De Lage Landen, looks set to finish second with 233nm to go until the finish line and an ETA of Monday afternoon (local time). "After a frustrating drift through the high, we've happily watched the millibars fall and the boat speeds rise," reports skipper Stuart Jackson.

"We're happily making good progress towards Geraldton under bright sun and blue skies, with a commensurate change in the crew's energy and mood as they anticipate the first cold beers roughly a day away," he said.

Meanwhile, the tussle for the last remaining podium place has heated up with Visit Finland, New York and home boat, Geraldton Western Australia, all looking to secure the blue pennant.

"Congratulations to Gold Coast Australia for their four wins in a row and to De Lage Landen, who look likely to take second place, that just leaves the last podium place," says Gareth Glover, skipper of New York.

"The third place we've had for most of the final part of this race has been taken by Visit Finland, who have sailed round the wind hole that had taken hold of most of the fleet including us. You will see us fight this one right down to the finish line," explains the American entry's skipper.

"With just over 400nm to Geraldton and the wind now filling in from the east, we are able to make Geraldton on this tack if the wind holds and, being over 90nm southeast of Visit Finland, it looks like they may have to tack a few times to get there.

"Everyone now is looking forward get to Geraldton now after a long and unforgiving race, being beaten by storms or becalmed for days; we have had it all on this leg," he said.

The third to fifth positioned boats currently have an estimated earliest arrival time in Geraldton of Tuesday with the next batch of boats closely following.

"It's all about trim and helming now as three contenders emerge in the battle for the last podium place," reveals the skipper of Visit Finland, Olly Osborne.

"The route around the top of the high-pressure system seems to have paid off, although having the benefit of watching the boats ahead of us during the earlier parts of the race, and a little help from the gods, has been invaluable," continued Osborne, who saw his team slip to tenth place after suffering mainsail damage, only to climb their way back up the leader board, with less than 400nm to go.

"It is beginning to look like we may be finishing within sight of other boats, and every extra mile we can gain here buys us time to concentrate on the pilotage as we approach port. It looks like we will be arriving at night so as well as racing it will require plenty of concentration to get the boat in safely, not to mention keeping the Race Office up all night!" he said.

"A great day's sailing: the wind finally came through and we made up some places on the leader board. The crew were over the moon, as this was a result of their hard work and focus," explains Coetzer.

"Last night, we had an electrical gremlin. One of the many GPSs stopped receiving info and went on the blink. As a result it was back to traditional sailing, looking at the tails and helming the boat according to them. It resulted in a good learning exercise. Daytime has arrived and we have found the problem and fixed it. It was saltwater corrosion," he explained.

Having been carefully studying the weather forecasts for the coming days, the Race Committee has made the decision to shorten the course for the back five yachts, which are trapped by light airs with little to suggest their plight will be shortlived.

Mindful that the teams will be setting off on the next Southern Ocean leg of their journey in a week's time, and the safety of the yachts and the crews being the primary concern of the race organisers, the difficult decision, one which was not taken lightly, has been made in the interest of the teams and was communicated to them by Race Director, Joff Bailey.

Their race will finish at 1800UTC at which time the teams: Edinburgh Inspiring Capital, Welcome to Yorkshire, Singapore, Qingdao and Derry-Londonderry, will be ranked in order of their distance to finish and asked to begin motoring towards Geraldton. The option to shorten the course is provided for in the Clipper Race Sailing Instructions.

Forty-three crewmembers are joining the race in Geraldton, with approximately the same number leaving at the end of their time onboard. A number of them have been affected by the decision by the Australian airline, Qantas, to ground their fleet yesterday. The last 24 hours have been particularly busy for the Official Travel Partner of the Clipper Race, The Marine Travel Company, with its team rebooking affected crew on alternative flights in order to ensure they arrive in time to join the race and to allow those leaving to get back home. The Race Committee has also taken this into account in making the difficult decision to shorten the course.

Meanwhile, in the hours remaining until the shortened course finish time, Qingdao are in a battle with the crew of Welcome to Yorkshire, both teams trying to combat the becalmed conditions.

"Right now, we're within three miles of Qingdao, which is very visible on the horizon. Ian and the crew on Qingdao are a good lot and it's great to have some company with whom to share the tedium,” says Welcome to Yorkshire skipper Rupert Dean.

“Banter and bad jokes are being traded over the airwaves, to help make the time go by. It's also very motivating to have a visible yacht to race against.

"We're moving at last, slowly, but better than nothing at all. Winds are still fickle, still off and on. We're hoping they will freshen as we continue our tortuous route north," continues Dean.

Onboard the Chinese entry, skipper Ian Conchie is enjoying the healthy rivalry between his team and their Yorkshire counterparts as he looks to stay ahead of them in sixth place.

"We've had the pleasure of sailing with Welcome to Yorkshire most of the night, which has pushed the crew to focus on boat speed to try to gain and keep our now regular sixth spot. Only time will tell," said Conchie.

With two of the identically designed Clipper 68s racing so close together it is the crew that will make the difference, playing a vital part in who secures the most race points for Race 4.

"It's interesting to see how the boats perform when next to each other. At certain wind strengths it would seem that Welcome to Yorkshire has the edge and at other wind strengths, we seem to have a slight edge. It's so close between us, it makes it interesting how the minute differences in the boats and how they are set up play out," reveals Conchie.

Currently in eighth Singapore skipper Ben Bowley and his crew are ruing a move, which they hoped would move them up the leader board.

"Another tedious 24 hours of inching our way toward Geraldton in light and shifty winds,” said Bowley.

“It seems that our tactic of trying to get through a small gap to the east of the high-pressure system did not really pay off.

"The high simply followed us to the east and we could not find a route through to the north before we got swallowed by it again. Had we managed to make a little more north we could have been charging toward the finish much as De Lage Landen is now, but we were a little too far south to make the plan stick. As a result, we have been forced to head back to the northwest and around the western edge of the high.

"All we can do now is try to glean as much height out of the light breeze and hope that we end up set better to the wind than both Welcome to Yorkshire and Qingdao for our final run into Geraldton.

"The lighter conditions are giving us all a chance for reflection on how far we have come since leaving Southampton and what challenges we have overcome to get here. We have to also look at how far there is still to go and how many races, and associated points, are still up for grabs. This race has not been our best but let us hope that is by far our worst in terms of position," signs off the Singaporean team's skipper.

Meanwhile on Derry-Londonderry, skipper Mark Light reports glorious conditions as they look to shorten the distance between themselves and the finish line.

"Today started with a beautiful sunrise and continued with the glowing warmth of the sun gradually enveloping all on deck.

"After a night of constant tacking to and fro making use of every wind shift possible, we are making progress (although not directly) towards our destination. I think we have successfully avoided the area of very light airs to the east of us, which has been responsible for the incarceration of some of the other boats and we now have consistent winds to utilise," says Light, with his team currently in ninth ahead of Edinburgh Inspiring Capital, who have taken up their Stealth Mode option.

"With all the tacking, shifting of airs, extra miles, changing of hotel bookings, re-organising of flights, in-port plans and frustrations onboard, it is worth reminding all onboard that this is the challenge of ocean yacht racing and this is also the reason why yachts always have destinations and not arrival times," he said.

Race 5 from Geraldton to Tauranga, New Zealand, will begin on Sunday, November 6.

*DTF = Distance to Finish, DTL = Distance to Leader
Full positions are updated every three hours and can be found at www.clipperroundtheworld.com

1). Gold Coast Australia leads the field into Geraldton, WA, to win Race Four of Clipper 11-12 Round the World Yacht Race, the world’s longest.

2). Skipper Richard Hewson at the wheel steers Gold Coast Australia over the line at Geraldton. The team are unbeaten from four races so far, with 11 races left to tackle.