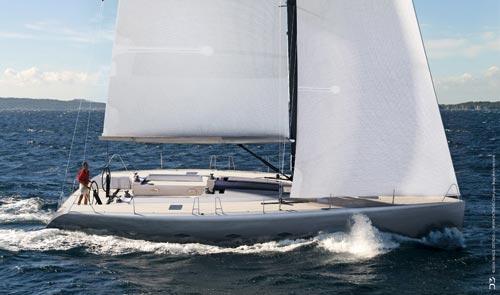 I will admit to not knowing an awful lot about Ionic Yachts, but when the designs for the yard’s new 48 were flashed in front of me, I felt strangely compelled to desire one. Badly!

Founded in 1999 when designer Pierre Lallemand decided to draw his dream boat — a combination of elementary design, liveability and performance — the first prototype, a 39, was launched in 2002 and was acclaimed by many as a new “little Wally”.

The 48 is a further evolution of that original design, drawn with the additional help of Bernard Nivelt of Joubert-Nivelt. The 48 once again aims to fit that cruiser-racer bracket, but with added style from flush decks, reverse sheer and a slender hull.

The yacht, the first of which is in build now, features construction in glass-reinforced carbon using Airex foam and vacuum infusion to create a hull that weighs in under two tons, while the interior design and materials are completely customisable — highly unusual for a yacht of this size.

The first Ionic 48 will make an appearance this autumn at the La Rochelle boat show, France, and will subsequently spend October blasting up and down the gulf of St Tropez on the Côte d’Azur. Methinks a sea trial might be in order… — Tim Thomas

Renderings: Dubbed the “little Wally”, the Ionic 48 will be touring the European boat show circuit this Northern Hemisphere autumn.