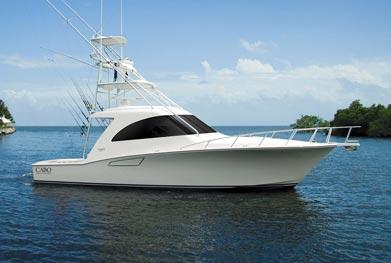 Hot on the heels of its successful launch last Ft. Lauderdale Boat Show of its 44HTX — for Hard Top Express — Cabo is following up with its equally exciting 40HTX. Built upon the same proven foundation as the 40 Flybridge and its predecessor, the 40 Express; the new model provides the strength and maneuverability of a Cabo, while delivering the comfort on deck provided by an integrated hardtop.

The 40’s helm deck offers twin forward-facing helm chairs on the centreline and starboard off the entrance to the lower deck. Her sportsfish amenities include a tackle station and storage compartment as well as an insulated drinkbox. And as with her previous sister ships, her cockpit offers a pair of in-sole fishboxes, dedicated rod and gaff storage, a 181.7lt transom livewell, padded gunwales, and a large aft door with a top gate.

Below decks, and with her standard layout, she can accommodate up to four; two in the forepeak and two on the convertible settee in the saloon/galley. An optional bunk room to starboard will up her accommodations profile to six.

The Cabo 40HTX scheduled for debut will be powered with twin Cummins QSC8.3 diesels at 600hp featuring CMD Zeus pod drives and will also have the option of conventional propulsion with either twin CAT C12 ACERTS or Cummins QSM-11Ms, both rated at 715hp.

Cabo, acquired in a smart move by Brunswick, is now built at the New Bern, North Carolina-based Hatteras facility by the same Adelanto, California workforce that first made the name famous. — Capt Ken Kreisler