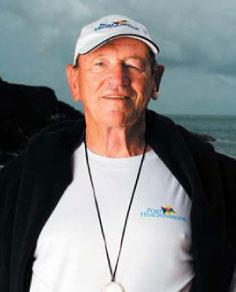 Williams is reported to have suffered a series of strokes over the weekend and was in ill health for several years. The Williams family paid tribute to a husband and father who through foresight, vision, passion, commitment and determination was suitably rewarded by seeing people enjoying themselves.

Keith Williams CMG, who passed away on the Gold Coast early today aged 82, was being remembered as an energetic pioneer in the development of tourism infrastructure which brought significant benefit to Queensland and Australia.

“Through Dad’s dynamic projects over the decades he created hundreds of thousands of jobs directly and indirectly, took Australian tourism to the world, generated billions of dollars in turnover and brought pleasure to millions of people,” said son Ben. “He was a leader in every sense of the word and totally committed to tourism.”

Keith Williams is recognised as the man who introduced theme parks to Australia with the creation of Sea World on the Gold Coast; who opened the Whitsundays to the world through the development of Hamilton Island as a world-class tourist destination, and who was a pioneer of waterskiing in Australia.

The family remembers their patriarch as a man who often put everything “on the line” because of his belief in a project and grand visions that most people struggled to comprehend.

The son of a postman, Williams was born in Brisbane on September 22, 1929. He left school at the age of 13 and took up a job as a petrol bowser attendant to assist his family financially. The following year he became a telegram delivery boy, delivering messages across Brisbane on a bicycle. By the time he was 16 he was establishing his first business — making leather motor cycle seats, saddle bags and other motor cycle accessories with his mother’s assistance. Within three years he was also manufacturing products licensed by Walt Disney and had a self-built factory in Bulimba with 50 employees.

Through his involvement in the advent of water skiing in Australia he moved his business to the Gold Coast and soon became the country’s largest producer of waterski equipment. He was also Australian waterski champion from 1957 to 1960.

His entered into the world of tourism in 1957 with the establishment of Surfers Paradise Gardens waterski shows in partnership with lifelong friend Jack Joel. In 1965 he moved this hugely popular aquatic show to Carrara on the Nerang River and the following year built the Surfers Paradise International Raceway — Australia's first integrated motorsport complex catering for road racing, drag racing and speedway. He was also responsible for the development of Adelaide International Raceway in 1970.

He established Sea World on the Gold Coast the following year.

Keith Williams’ development of Hamilton Island as a major national and international tourist destination started 1978, originally in partnership with Brisbane car dealer Bryan Burt. This included the creation of a jet airport, sheltered marina and a wide range of tourist and residential accommodation. Over the ensuing 12 years Hamilton Island became Australia's largest, most profitable and successful tourist destination, an accolade it still holds today, the family said. Keith Williams is also recognised as the man who initiated Hamilton Island Race Week in 1984, a regatta which stands today as one Australia’s premier yachting events.

Speaking on behalf of his family — his mother Thea and sister Becky — Ben Williams said they were overwhelmed by the many hundreds of condolence messages they had received. He said details of a gathering to celebrate Keith’s life would be announced shortly.