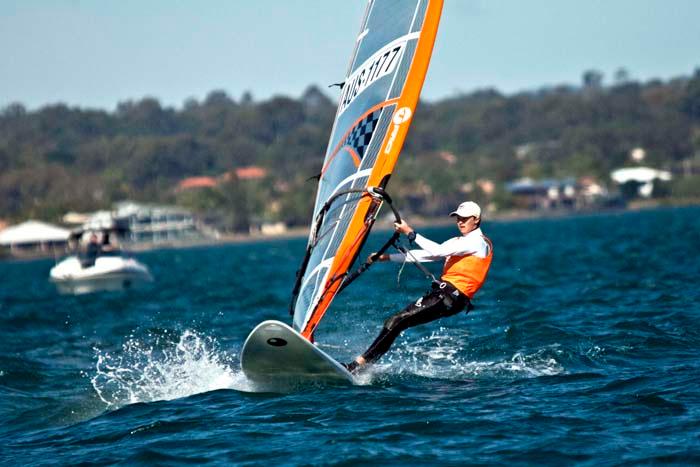 Held over this coming NSW Labour Day long weekend, the annual regatta is hosted this year by the Illawarra Yacht Club on Lake Illawarra.

One of those competing is 17-year-old Sam Treharne from Sydney’s Pittwater. Sam started his sailing career on Manly Juniors and Flying 11s and has since gone onto focusing on the windsurfing classes. This year he has entered his Bic Techno 293 for the annual regatta.

The Techno 293 class is designed to develop windsurfer racing for youth competitors around the world in an inexpensive racing format. The class forms part of the “Olympic Pathway”, which is recognised by ISAF as the feeder class to RS:X at Olympic level.

Sam remembers when he first started sailing. “My dad and brother encouraged me, taking me sailing on a little yacht called Daisy,” he recalls. Sam’s dad is of course Hugh Treharne, who was tactician on the America’s Cup winning Australia II.

With many other members of his family involved in sailing, it is probably inevitable that Sam inherited the passion. He was quick to mention another family member when asked who he sees as a rival: “I guess I’d have to say my brother Robbie, or my mate Eamon Robertshaw from Western Australia.”

In the lead-up to a regatta such as this Sam says he doesn’t let the pressure get to him. He just gets out on his windsurfer as much as possible after school and on weekends and talks things through to his coach, Craig Ferris from the NSW Institute of Sport.

With an attitude that belies his dedication, his ambition of being in the top 10 of the world may just be on the agenda.
“I try my best and have fun with it,” says Sam.

Yachting NSW is a not-for-profit organisation responsible for the administration, promotion and advancement of the sport of sailing at all levels throughout NSW.

Sam Treharne will be racing his windsurfer in the Techno 293 class at the NSW Youth Championships this weekend. He is the son of Hugh Treharne, the tactician on the America’s Cup winning yacht Australia II.