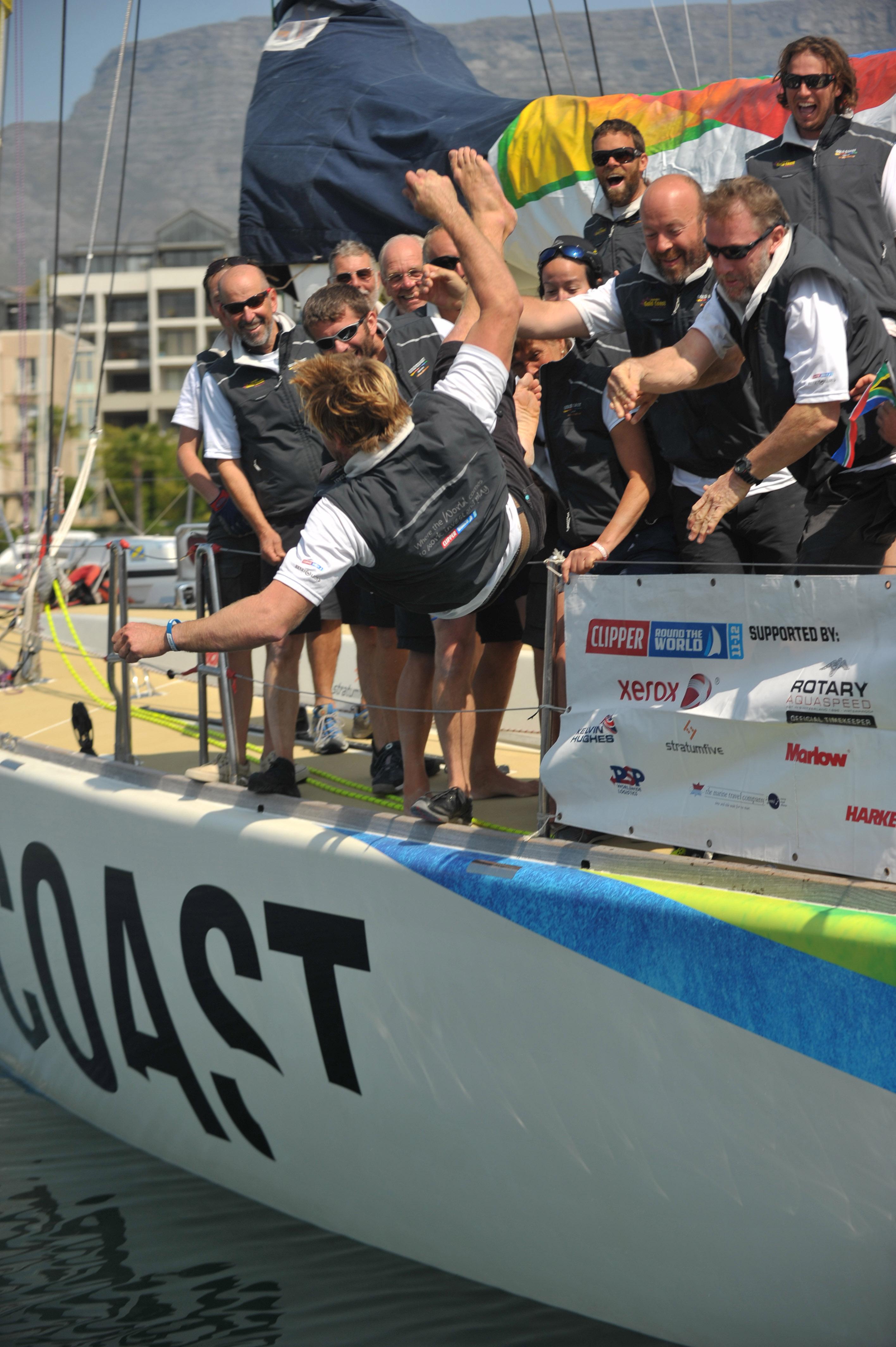 secured their third consecutive win in Clipper 11-12 crossing the finish line off Cape Town at 1056 UTC on Tuesday.

The Australian team remains unbeaten after the first three races of the year-long series with their latest victory keeping them firmly at the top of the leader board.

Skipper Richard Hewson said his team struggled to keep the boat moving in less than 5kts of breeze as they approached the finish.


"After the sun rose the wind became so light that our lightweight spinnaker would no longer fill but we managed to hoist the Yankee 1 and staysail to keep us moving towards the finish," said Hewson.

Arriving in the V&A Waterfront, Hewson was thrown overboard by his celebrating crew. The dripping but jubilant skipper said, "Third-time lucky — a fantastic race by all the crew. The finish was very challenging. We had light airs at the beginning and end and some really tough conditions in the middle, so the dunking and the finish really reflected the whole race.

"We had the Traffic Separation Scheme (shipping lanes) on one side and Table Mountain on the other side taking away our wind and we just sat there. We had been hoping to finish two hours earlier, but without wind sailing boats don't move," continued Hewson, whose uncle was on the quay to welcome him.

Visit Finland emerged from Stealth Mode overnight, but was unable to catch the Australians before they crossed the finish line and had 35nm to run to the finish at 1200 UTC.

Meanwhile, De Lage Landen is keeping the pressure on Visit Finland and Stuart Jackson said his crew is giving the best of themselves in the duel for second place.

"After chasing Visit Finland for days now, everyone is aware that it will be a fight until the last mile. Focus is the key word today both on deck and down below," said Jackson.

On Singapore, skipper Ben Bowley and his crew are feeling buoyed after overtaking Derry-Londonderry.

"It was very satisfying seeing that by midnight we had managed to overhaul Derry-Londonderry. If we can maintain our fourth place until the finish then we would retain our second place overall, which would be an excellent starting point for Leg 3," said Bowley.

Despite coping with light, fickle winds and a spinnaker wrap overnight, Bowley said that his Singaporean team, backed by Keppel Corporation, has continued to make "reasonable progress" under white sails.


"Our hope now is that the wind holds just long enough for us to make it to Cape Town in the next couple of days as there would be nothing more frustrating than being within striking distance of cold beer, rare steaks and chips only to be becalmed for another 24 hours," Bowley said.

Mark Light reports that his team endured a "tough night" on Derry-Londonderry after the wind died allowing Singapore to sneak ahead.

"The wind deserted us and we have struggled to make progress since, reminding us that the race is never over until that line is crossed," said Light.

He said he had hoped that his team's decision to head in a northeasterly direction to create a little more apparent wind would pay off, but the wind to the south had been stronger than forecast allowing the southerly boats to continue flying their spinnakers and achieve greater boat speeds through the night.

"Whether it was a brave move or foolish, it's hard to say,” says Light. “We always had the chance of catching the boat ahead and the lure of a third place and a podium finish is a hard one to resist, but in doing so, we might have jeopardised our own fourth place," he conceded.

Gareth Glover and his team on New York are also pushing hard despite also battling with lighter winds. With just 81nm separating them from Derry-Londonderry and Qingdao snapping at their heels, Glover is hoping that the boats up ahead have run out of wind, too.

"There are still over 250 miles to go on this race and it's never over until you have crossed that line, so we will keep pushing until we are there," said Glover.

As they approach Cape Town, the teams are discussing maintenance programmes for the stopover. Glover said his team just has two major jobs for the next stopover, replacing three battens in the main and taking off the main traveller to undertake repairs, as their three spinnakers remain undamaged.


On Edinburgh Inspiring Capital, Gordon Reid and his crew have been dealing with their latest round of challenges, this time in the form of a rope or fishing net caught around the rudder.

"It's a straightforward matter of diving under the boat with a knife in hand to cut it free,” said Reid. “

“In a marina it's an easy job but in 20kts of breeze on big ocean swell, swimming three metres under a slamming 40-tonne boat is no walk in the park, so for now we let the rope stream.

“With very little impact on the steering, it is no real drama, but it must be removed before we start the engine and engage the prop, so we're waiting until conditions are more favourable for the skipper to take a dip in his tartan trunks," he said

With almost 600nm to the finish, the Edinburgh Inspiring Capital team faces the prospect of another few days at sea, while the first teams enjoy the trappings of life ashore but Reid’s team remains positive.

"Although everyone is looking forward to getting to Cape Town, Dave Gallagher, one of our leggers, suggested that we be thankful and consider ourselves lucky to have had the experience we have had both as individuals and a team, and we decided to come up with 10 reasons to be thankful for staying on the boat longer,” said Reid.

“When we asked everyone to contribute, we ended up with a lot more than 10 reasons.

"The crew of Edinburgh Inspiring Capital has proved that they've got what it takes to cross the South Atlantic, ride the storm and look after the Purple Beastie and each other to overcome challenge after challenge. They have what it takes and I am proud of each and every one of them," he said.

Rupert Dean said his team on Welcome to Yorkshire had decided not to fly a spinnaker overnight in light winds to avoid the risk of damage to the precious sails by getting caught in the rig.

"As we near the end of a long, challenging leg, Cape Town cannot arrive fast enough for all on Welcome to Yorkshire. It dominates conversation, with estimations of calculations of our ETA varying as wildly as our boat speeds over the past few days, as our VMG (velocity made good) has ranged from 2 to 11kts," said Dean.

With just over 300nm to the finish, Dean said there is still a lot of racing to be done. "Positions can be lost and won in the final few yards, so there is everything to play for," he says.

Ahead of Welcome to Yorkshire, Qingdao is threatening New York's sixth place, with just 2nm separating the two teams.

Qingdao's skipper Ian Conchie said his team had enjoyed another good day's sailing as the wind backed through the day allowing them to change to their heavyweight spinnaker to "reach nicely towards the finish line".

"The toll of ocean racing is now showing on the boat,” said Conchie. “We only have one Yankee halyard and one spinnaker halyard, which forces the crew to rethink how we carry out each evolution, making best use of what we have and all the winches," he said.

Along with changing wind conditions, Conchie reports that the temperature has been fluctuating too as they approach South Africa.

“During the day we have lovely sunny conditions allowing the brave to go down to shorts but then as the sun sets the temperature drops and the thermals hats and gloves come out, quite a contrast day to night," he said, adding that he had picked up the "crew cold" just in time for Cape Town and spent the whole day in thermals as a result.

On Geraldton Western Australia, skipper Juan Coetzer said he is looking forward to arriving in Cape Town, a city where he lived and worked before moving to the UK to work for Clipper Ventures.

"It has always been a dream of mine to sail around the world and I feel overwhelmed and ecstatic to be arriving in Cape Town as part of this opportunity of a lifetime," said Coetzer.

Yesterday brought more frustrations for Coetzer and his crew. First their heavyweight spinnaker started to develop another tear along the luff tape and then they made a hole in their medium-weight as the wind dropped and shifted.

After a day of spinnaker dramas, the Geraldton Western Australia team switched to white sails as the wind built and everyone is now focused on getting to Cape Town as soon as possible.

One of the crew on Geraldton Western Australia who is particularly looking forward to arriving is South African Tony Welton. A semi-retired financial director from Durban, Tony is taking part in Leg 1 and Leg 2 of Clipper 11-12.

"I'm most looking forward to a bath, clean clothes, a good meal and seeing my wife, who I last saw on 18 July when I left South Africa for Gosport," said Welton.

"After nearly three weeks at sea I can't wait to tuck into biltong, Windhoek beer, rump steak, lots of vegetables and droëwors (a popular South African snack food made by drying the traditional coriander-seed spiced boerewors sausage)," he added.

Following Gold Coast Australia's arrival, the Visit Finland team is expected to finish around 1700 UTC today and then De Lage Landen at around 2100 UTC. Singapore and Derry-Londonderry are expected to arrive tomorrow at 1600 UTC and 1700 UTC respectively. Estimated arrival times for the rest of the fleet will be posted in due course.

The 10 boats will be berthed in the Victoria & Alfred Waterfront until the start of Race 4 to Geraldton, Western Australia on October 5.

Full positions are updated every three hours and can be found at www.clipperroundtheworld.com

1). Gold Coast Australia's skipper Richard Hewson is thrown in the harbour by his crew as they arrive in Cape Town, South Africa, at the end of Race 3 of the Clipper 11-12 Round the World Yacht Race. It is the third individual race victory in a row for the crew.

2). Gold Coast Australia, one of 10 international teams competing in the Clipper 11-12 Round the World Yacht Race, have continued their winning streak by finishing first in the third stage from Rio de Janeiro, Brazil, to Cape Town, South Africa of the 40,000nm circumnavigation.