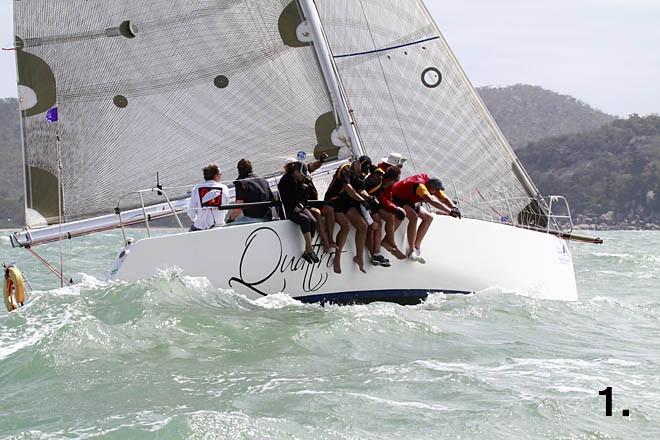 Tuesday, Sept 6: With the weather forecast predicting 8 to 10kts from the southeast, PRO Denis Thompson set the IRC Racing, Performance Racing, Multihull and Cruising with Spinnaker 1 Divisions Course 23, the Launs Beach Race. This 16.5nm course took the fleet to a clearing buoy 1nm upwind of the start-line then across Cleveland Bay towards the Launs Beach and return.

Cruising with Spinnaker Division 2 and Cruising Non-Spinnaker divisions were set a similar, but shorter 13nm course.

For many crews today was “make or break” with podium placings still undecided in several of the divisions.

After yesterday's early race retirement due to hitting a submerged object, Malice was back to her best flying around the course in the freshening breeze and crossed the finish well ahead of the fleet. In fact, no other boat was in sight as she took the gun, approximately one hour and 10 minutes after starting.

Dockside, Graham Donnell commented: “We had to fight hard to hold out Leon Thomas and his crew. I want to thank my team for a great effort all season.”

Leon Thomas said: “We forecast Quattro would be the boat to beat in this regatta. They outsailed us and are well deserved winners.”

Cooper and her Cairns and Port Douglas crew, seven women in all, were excited with their win.

“The seven girls have done it!” said Cooper. “Lovely day out on the water, it was a much better race than expected and we did much better than I expected we would do.”

Malice took Multihull line honours from Graeme Etherton's The Boat with Mal Tynan's Barbarella third. The handicap win went to Barbarella from Malice and The Boat.

There was a sensation today when eDoc capsized midway through the race. Once safely back at the Nelly Bay marina Gavin Le Sueur explained what happened.

“Our first ‘Choc Top',” said the skipper from Cairns, in reference to Morton Bay sailors who count the number of dinghies returning to dock with mud-stains on their mast tips after a strong day on the water.

“It all happened in slow motion, entirely my fault, lots of lessons learned. No one was hurt and the boat’s back in the marina and we will be at the party tonight,” said Le Sueur.

Mal Tynan (Barbarella) commented: “A great regatta. More breeze than we needed but we've had a great battle with Graeme Etherton and The Boat. Lots of fun.”

“We are very proud of this Nacra 36; we are redesigning the boat in stages. You will see lots more of her in time to come,” smiled the new multihull champion Richardson.

The 2011 Cruising with Spinnaker Division 1 Champion is James Finch's Finch 40 Warrigal, from the Townsville Yacht Club. Boudicea, Mike Steel's Dufour 34 from the Townsville Cruising Yacht Club was second, with Solona II, Phillip King's J&J AD Boats third. This was a tightly fought series indeed, with just one point separating each of the top three.

James Finch commented dockside: “Our beautiful old steel boat did us proud at this regatta.”

After the day's racing, Gary Bruce was beaming. “We won the Battle of Bowen!” he said.

With racing concluded for another year, everyone is looking forward to the presentation night, which will mark the end of another highly successful Sealink Magnetic Island Race Week.