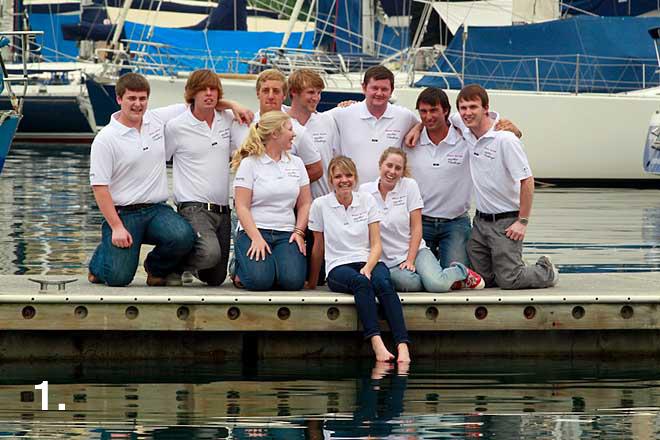 The Notice of Race and Application for Entry are now available for the 67th edition of the Rolex Sydney Hobart Yacht Race at the Cruising Yacht Club of Australia (CYCA).

The CYCA, the Race’s organising authority, also said our youngest solo circumnavigator, Jessica Watson, 18, would compete in Australia’s bluewater classic this year, with one of the youngest crews in the event’s 66-year history.

Watson and crew will be sailing south on the Sydney 38 Ella Bache - Another Challenge, once owned by Sydney Hobart luminary Lou Abrahams. The boat has completed eight Sydney Hobarts — four with Abrahams at the helm and four with Chris Lewin as skipper — and will be turned ‘pink’ in September.

Lewin holds the record for the youngest average-aged crew, having completed the 2004 race with a team of Melbourne University students and placing third in the Sydney 38 Division.

Leading the battle for Sydney Hobart line honours this year will be Bob Oatley’s defending champion and race record holder Wild Oats XI. The super maxi has claimed line honours in five of the last six Hobart races, including four consecutive victories from 2005 to 2008.

Wild Oats XI has undergone significant hull surgery this year that included the forward rudder being removed and replaced with twin retractable centreboards — all aimed at improving the yacht’s speed up- and down-wind.

Trying to end Wild Oats XI supremacy will be Anthony Bell’s Investec Loyal and Rambler 100. The latter yacht has been recovered after its keel bulb snapped off, while competing in the Rolex Fastnet Race last month.

The CYCA said rumours are swirling that Rambler’s owner George David will have the boat and her new keel shipped directly to New Zealand, where the keel will be fitted and the rig reinstalled before making the trek across the Tasman Sea to Sydney.

Anthony Bell took sole ownership of Investec Loyal after last year’s Sydney Hobart and has given it a facelift, modified the keel and brought a new carbon fibre canard, all designed to increase boat speed.

Investec Loyal, which gave Wild Oats XI a serious run for her money in July’s Audi Sydney Gold Coast Yacht Race, will undergo phase two of a re-modelling program over the coming months to ensure she is at her optimum come Boxing Day.

Since the launch of the Notice of Race, Stephen Ainsworth’s 2010-2011 Blue Water Pointscore champion Loki, was the first of 10 entries to be received. The RP63 has been the boat to beat over the last couple of seasons, after also being named the 2010 Audi IRC Australian champion.

Natelle Two is the first Tasmanian entrant and will sail under the burgee of Derwent Sailing Squadron.

The yacht club is predicting an international fleet of around 90 yachts will make the start line at 1pm on Boxing Day, for the annual 628nm sprint to Hobart.

The Rolex Sydney Hobart Yacht Race 2011 Notice of Race is now online at http://rolexsydneyhobart.com/editorial.asp?key=1711 with applications for entry being accepted online.

Applications for entry close at 5pm on November 1.
— Jennifer Crooks