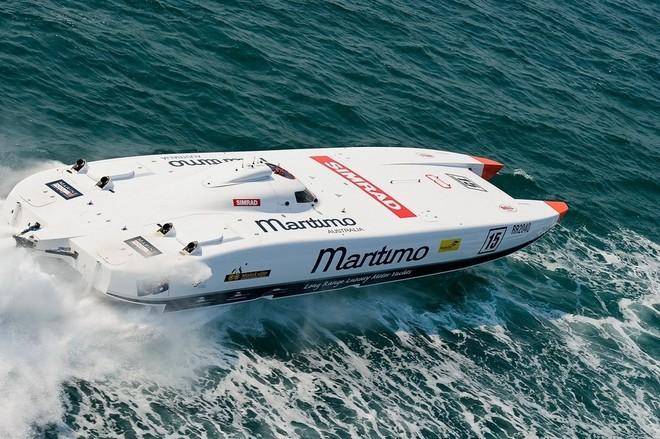 SPORT - Maritimo in a class of its own

The Maritimo team says it’s in pole position leading into the World Championship at Florida in November, after continuing its winning streak at the Australian Offshore Superboat Championships at Redcliffe recently.

raceboat has won four of the six legs of the Class One series to date, the latest win at Redcliffe earlier this month saw the team finish more than one minute ahead of their rivals, with an average speed of 118mph.

The performance secures Maritimo’s place at the top of the leaderboard heading into the final two rounds in Victoria (Geelong and Williamstown) later this year, boosting confidence ahead of the team’s return to international racing in Key West, Florida in November.

Maritimo helmsman and marketing director Luke Durman said the team’s success was a result of the quality of the raceboat and the experience of the Maritimo Offshore Racing crew, including throttle man Ross Willaton.

“To have such an unassailable lead at this stage in the competition is a great coup for us and it certainly gives us a lot of confidence moving into the next round of competition,” said Durman.

“Maritimo has been competing in the Australian offshore racing championships for about a decade, and we are ready to take the challenge to the next level and compete against the world’s best in Florida.

“Our recent results and long-term track record of success shows that Maritimo is at the forefront of offshore racing in Australia, and we are now gearing up to put ourselves in the spotlight on the international stage,” he said.

The catamaran-hulled raceboat, powered by twin 1200hp Mercury Racing supercharged engines, has been manned by Luke Durman, who has eight Class 1 wins with Maritimo, and Ross Willaton, who boasts 12 Class 1 wins with the team.

Durman said a different but similar raceboat left by ship for the USA last week for Florida and the 31st Annual Key West World Championship (from November 6 to 13).

“We will be going up against some very strong competitors, but we have a world-class team and a world-class boat so we are confident,” said Durman.

“Our boat is smaller than most of the others in the field, which we hope will allow it to navigate the course with more ease than some of the larger vessels.

“We look forward to a strong finish in the Australian offshore championships and a successful run in Florida,” he said.