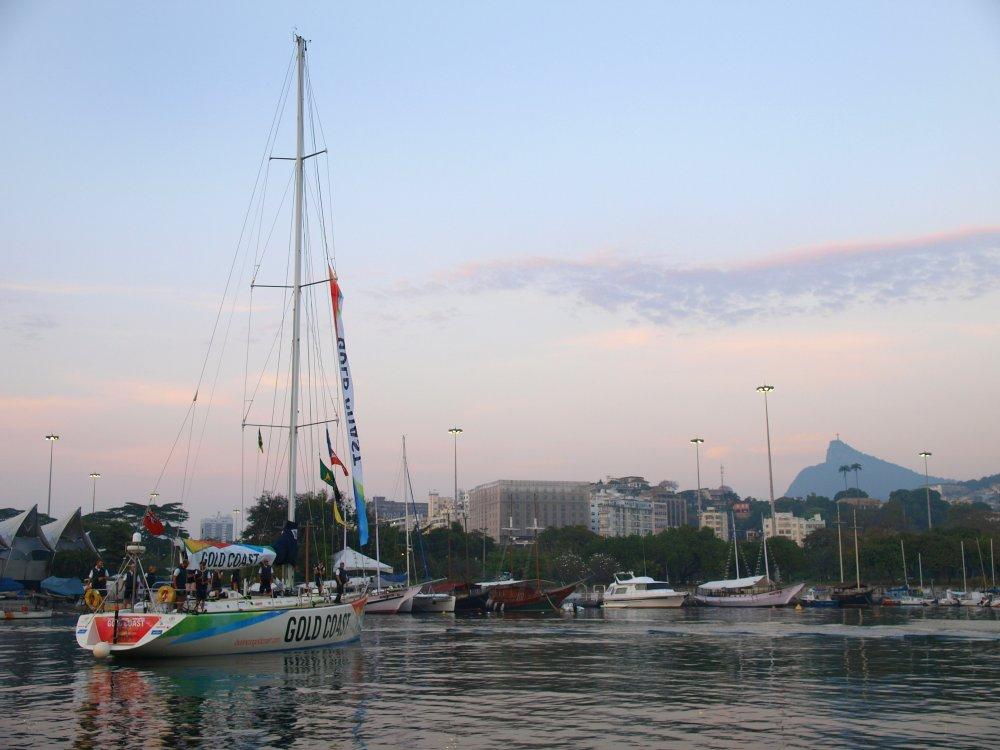 s commanding victory in Race 2 into Rio, the battle for the remaining podium positions is being fiercely contested.

The teams at the front of the fleet have been pushing to make up every extra mile as they close in on Rio de Janeiro's iconic harbour.

After surfing straight towards Rio under the heavyweight spinnaker logging speeds around 17kts yesterday, Rupert Dean on Welcome to Yorkshire reports that they have experienced an unexpected wind shift to the west and light variable winds off Cabo Frio. This raises the prospect of a frustrating "uphill slog" to Rio while Singapore continues to close the gap from behind.

"The challenge for us now is to keep positive, focused and mentally disciplined for the difficult hours ahead," said Dean.

With Welcome to Yorkshire having been in Stealth Mode until 1200UTC today the other teams will have been in the dark about the whereabouts of the boat that was lying in second place 24 hours ago, and now has just 86nm to the finish.

After finishing at 0707UTC, Gold Coast Australia's skipper Richard Hewson said that he was "ecstatic and immensely proud of his crew".

Escorted into the Baia de Guanabara by a pod of dolphins at daybreak after their second win in Clipper 11-12, the victorious team celebrated with fine views of Rio's Sugarloaf Mountain.


"Overall, Gold Coast Australia has had a fantastic race from Madeira and the crew performed brilliantly," said Hewson. "Not only have we won the race, but we also picked up points from the Scoring Gate and the Ocean Sprint, which will put us in a very good position for the remaining race around the world.”

As well as responding to the rapidly changing wind conditions, Singapore has been experiencing long, stressful nights dodging the high number of vessels in the area.

"We have not seen traffic density like this since leaving the Solent about a month ago. Add into the mix winds from 3 to 35kts, varying in direction by as much as 180 degrees, and you have the recipe for a long and stressful night sailing down the Brazilian coast line," said Singapore Ben Bowley.

Like Welcome to Yorkshire, Singapore is beating to the final waypoint at Cabo Frio knowing that New York is less than 100nm behind and closing in fast.

Meanwhile, the provisional results for the Ocean Sprint have been announced following the contest for the fastest boat between 5 degrees and 10 degrees South. Gold Coast Australia bagged the extra point after completing the distance of approximately 300nm with a provisional time of 31 hours 6 minutes 31 seconds. The second fastest team to cover the distance was Welcome to Yorkshire in 32 hours 3 minutes 2 seconds.

Full provisional results for the Ocean Sprint are as follows:

Less than two minutes separated the times logged by Singapore and Geraldton Western Australia for the Ocean Sprint demonstrating just how close the racing can be between the Clipper 68s.

The duel between Qingdao and De Lage Landen continues unabated, with the Chinese team currently gaining the upper hand by just one mile.

Ian Conchie on Qingdao said his team is still racing in close quarters with their Dutch rivals. "We have spent the day duelling with De Lage Landen trading space with each sail evolution," he says.


Despite the close racing, Conchie admits that the idea of a good beer and a fresh steak is one of the top topics of conversation onboard after almost three weeks at sea.

Mat Booth on De Lage Landen said the distance between the two yachts has been fluctuating between 100m and a mile.

As an antidote to the tension of the close duel, the two teams have been playing a protracted game of inter-boat Battleships, with a move being made every hour via VHF.

"It's a refreshing break from the routine after weeks of no contact, and the winning team will receive a drink from the losing team when we arrive in Rio," said Booth.

Throughout the fleet, the teams are eking out every last bit of boat speed to get as many points as possible for their first ocean crossing.

On Edinburgh Inspiring Capital, Gordon Reid's crew has their sights on improving their current eight position before they reach Rio.

"The race crew on watch are constantly trimming the sails and calling for the skipper's input for the final little squeeze. Three weeks ago if you mentioned twist, cord length, sheeting angles or luff tension, some would scratch their heads but now everyone is constantly looking for every bit of speed," said Reid.

After living at a 30-degree angle for days on end, the crew on Derry-Londonderry is making the most of the boat flattening off a little as the sheets are eased to get some jobs done. Skipper Mark Light said: "It has made an instant impact on all of us and everybody has that 'lets get it done attitude!' We still do all the normal routine things that make up a life at sea but extra tasks have been undertaken and as a result Derry-Londonderry looks beautiful."

On Visit Finland, currently in fifth place, the crew is enjoying some downwind sailing with 300nm separating them from the finish line. "Over the last 48 hours, we have seen some very different sailing conditions to the gradient trades that we have enjoyed reaching south on during the last week,” says skipper Olly Osborne.

“We now have our heavyweight spinnaker up and even this more moderate sail plan sees the boat fully powered up running at 16kts before a strong breeze.

"Helming deep downwind in these conditions is very demanding and it requires full concentration to anticipate how the boat will react to the next wave in the pitch darkness,” he said.

Welcome to Yorkshire is expected to arrive in Rio's Marina da Gloria not before 1600 local time this afternoon, with Singapore later on Wednesday evening. Updated estimated arrival times will be posted when available.


*DTF = Distance to Finish, **DTL = Distance to Leader Full positions are updated every three hours and can be found at www.clipperroundtheworld.com


THE RACE
The Clipper 11-12 Round the World Yacht Race started on July 31 from Southampton on the UK's south coast and will return to the Solent in July 2012 after 40,000 miles of ocean racing — the world's longest ocean race. The event was established by Sir Robin Knox-Johnston to give everyone, regardless of sailing experience, the opportunity to experience the exhilaration of ocean racing. More than 500 people representing more than 40 nations will compete in Clipper 11-12. They can sign up for the whole circumnavigation or one or more of eight legs.

Photos:
1). Gold Coast Australia arriving at Rio de Janeiro to win the second race of the Clipper 11-12 Round the World Yacht Race.

2). Crew on Gold Coast Australia celebrate their victory to Rio de Janeiro and are now unbeaten after two races.