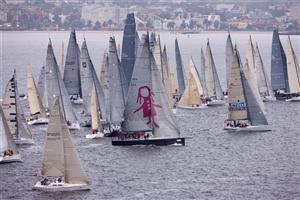 It used be just plain old Geelong Week, but the Southern Hemisphere’s biggest regatta held every January has a new name change, its second in two years. Previously known as Victoria Week, the 168-year-old sail fest has morphed into Festival of Sails 2012.

Planning for 2012 is well underway says host club Royal Geelong Yacht Club (RGYC), which along with the Victorian Government and City of Greater Geelong, relaunched the event with the new branding. According to the club, the name change consolidates on the regatta’s “rich history, growing regatta fleet and increasing competitor and public visitation”.

In more recent years thanks to corporate support, the regatta underwent a number of significant name changes, from Skandia Geelong Week and more recently to Audi Victoria Week. However, the essence of the event has remained true, says RGYC, as the largest annual yachting regatta in the Southern Hemisphere (first held in 1844) and Geelong’s Waterfront Australia Day Festival that consistently entertains more than 100,000 visitors.

“The Festival of Sails 2012 will again take place in January 2012 over the Australia Day long weekend, with thanks to the continued support of the State Government of Victoria, the City of Greater Geelong, as well as many loyal sponsors and the Regatta and Festival participants,” said RGYC commodore Andrew Neilson.

The RGYC said its regatta consistently attracts the highest calibre of boats from all around Australia to Victoria to compete in the historic event.

This year will see two National and two Victorian Class Championships being held at the regatta, with the Melges 24 and Farr 1020 fleets competing for their respective Australian titles, and the SB3 and Moth classes vying for the Victorian titles. With more than 15 different race series catering from the highest performance Grand Prix racers to trailerable cruisers, the varied race action is sure to offer something for everyone, the club said.

The sailing program again starts with a Melbourne leg, which in 2012 involves the entire Premier Racing Series competing in two days of high-end racing at the northern end of Port Phillip Bay on the weekend prior to the passage race.

The historic Melbourne to Geelong passage race, which attracts more than 300 boats at a mass start off St Kilda Beach, will take place on Australia Day (Thursday, January 26). The 34nm race has nearly three times as many starters as the Sydney Hobart, and the waters of Port Phillip enable the spectator fleet to follow the race participants all the way to Geelong and then join them as a part of the festival action.

The shoreside festival features more than 60 acts across three stages, more than 80 stalls, plus food and wine, along the Geelong waterfront and RGYC, as well many family-friendly activities to keep the non-sailors entertained both on and off the water.

The Notice of Race will be released in the first week of November and in the interim, a Preliminary Sailing Program is available for download at
www.festivalofsails.com.au The RGYC said a new event website will be launched in early October.