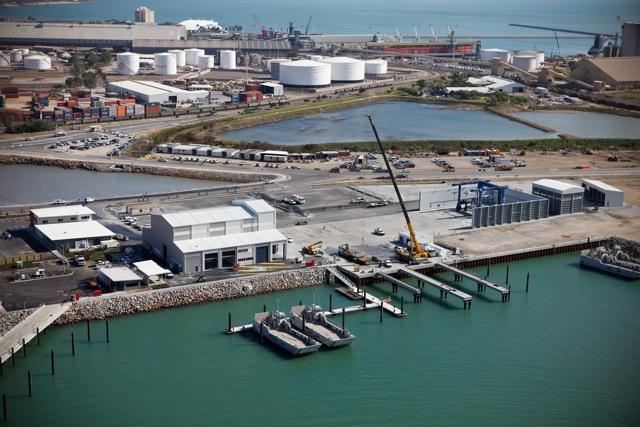 Fast tracked as part of Stage One of the $110 million commercial marine development, which is underway at the mouth of the Ross River, the project was completed for marine maintenance facility Rosshaven Marine.

Catering for small recreational boats through to large military and commercial vessels up to 500 tonnes, Rosshaven Marine’s new mooring facility is a heavy-duty specification for use in refit work.

The main pontoon incorporates a 55m walkway — with stern-to mooring for multiple boats — with support and fender steel piles all at 610mm diameter. The whole structure has been manufactured using Superior Jetties’ Super Elite product, custom-built with a 750mm freeboard and stainless steel throughbolts on hardwood walers. A custom fuel system also reticulates through the pontoons allowing for multiple fuel outlets.

“Despite the adverse weather events that have impacted construction in North Queensland this year, this purpose-built mooring facility was delivered on time and on budget,” said Hogan. “It was an excellent team effort, with solid support from local contractors Pacific Marine Group and Minelec.”

Managed by the Townsville Marine Precinct Alliance (TMPA), the TMP is a joint venture between the Townsville Port Authority and construction company Laing O’Rourke to reclaim 34 hectares to establish a new facility for commercial marine businesses. Stage Two of the development is scheduled for handover in December 2011.