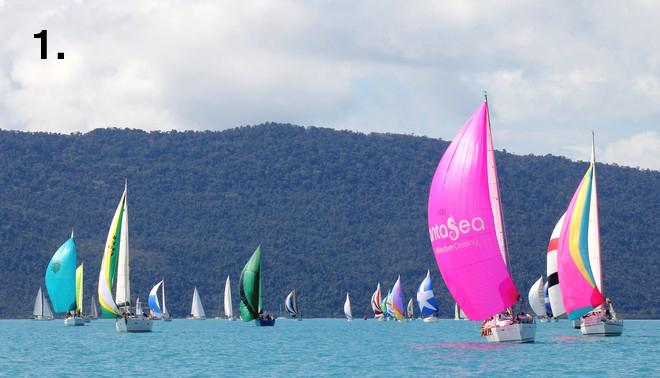 SPORT - The Philosophers Club on top at Airlie

The Pioneer Bay large triangle course has turning marks, at Grimston, Pioneer Bay and Bluff and is between 16 to 25 nautical miles in length.

With placings at the top of leader boards extremely close, today's race would decide the trophy winners.

Dreaded light winds and a variable winds forecast had PRO Tony Denham a concerned man with a furrowed brow this morning.

The Multihulls were the first fleet away and at the first mark, TeamVodafoneSailing (Simon Hull) led Malice (Mal Richardson) and Trilogy (Keith Glover). At the second mark, Bluff, it was very soft.

Wayne Millar's Zoe led the IRC Racing fleet at the top mark. She hoisted a fractional kite and just managed to hold it and it was very shy. Neil Paden's Neat Engineering Wailea and Jeffrey Brown's Double O Seven fell down the course away from the Bluff mark. Gary McCarthy's Brilliant Pearl was among a group who did not hoist kites until late and they did better in the light breeze.

Close to Grimston Point, TeamVodafoneSailing was almost becalmed and Malice closed quickly. Behind them, Zoe initially held a good lead on Iota but the lighter Farr 40 sailed inside her much heavier Townsville rival. Third was Nutcracker with its Victorian team having broken out the tropical shirts for the last race. The Beneteau 34.7 Brilliant Pearl moved forward and held out Neat Engineering Wailea and Double O Seven.

From the start-line division after division was streaming across the Bay in a six- to seven-knot westerly but at the Bluff mark the area was rapidly turning into a parking lot, limp spinnakers hanging from the halyards.

A pod of Pacific bottlenose dolphins provided entertainment as they played among the drifting boats, making the only ripples on the bay.

The new breeze kicked in from the northeast at around eight to nine knots. It was a colourful site as the yachts headed from Grimston Point towards Pioneer Rock.

Pierre Gal's Sports 8xx Kiss was the first boat to finish the regatta. TeamVodafoneSailing was again the first multihull to finish and second boat across the line, having sailed one more lap than the Sports Boats. Stealthy was third across the line, followed by Blokes World, which had a very untidy deck with her headsail crumpled on the bow, partially swimming. Mustard Cutter followed, and then came the rest of the Sports Boat fleet.

Michael Green commented: “Another great regatta. The strength of the Sports Boat class is a credit to Cam Rae and the ASBA. We were glad to do so well in the heavy-boat class. The Green sails did us proud.”

The overall series winner for SMS Division 1 was Richard Devries' consistent Magic 25 Go Majik from Evergreen and Kaito. Dockside, Richard DeVries said: “It was great to win the heavyweight division, with the heaviest and oldest boat here, this Magic 25 was built in Nowra 20 years ago. We are very pleased to get third overall behind Kiss and Blokes World.”

One of the old guys, Jan “Clogs” Scholten chimed in, “This win is a great reward for Pierre. He designed this boat, built it, built the sails, motivated this crew together and helmed us to a good series win.”

“A very much deserved win,” agreed Bob Cowan owner of Stealthy. “Pierre has raised the standard of the sports class; he continues to give us something to aim at.”

The overall Multihull Series winner for 2011 was J'uvert, Peter Berry's Prescott Whitehaven 11.7 on count back from Trilogy. TeamVodafoneSailing finished third.

The overall IRC Racing series winner for 2011 is Peter Sorensen's Sydney 36CR The Philosophers Club finishing one point ahead of Brilliant Pearl and Nutcracker, who were tied on points.

Gary McCarthy said: “It was hard work out there today. The team worked hard to win the last two races and to knock off Nutcracker was more than we expected.

“We are all exhausted; we focused so hard on getting every element of our racing right all day. We worked the tide in the very light conditions and that really made a difference to our final result,” he said.

At tonight's prize giving, Sorensen announced very seriously that The Philosophers Club had today voted this event the Best Regatta in the Universe for 2011.

Duncan Hine commented: “This little boat is going faster than ever. The conditions suited us, particularly over the last few days, so we very much enjoyed our first tilt at the class.”

Principal race officer Tony Denham was much relieved when he came ashore. He said: “After a superb week the weather was certainly tricky today.

“When the breeze dropped out, we positioned finishing boats at every mark, but the sea breeze came in stronger than we expected and we finished the fleet inside our expected time,” he said.