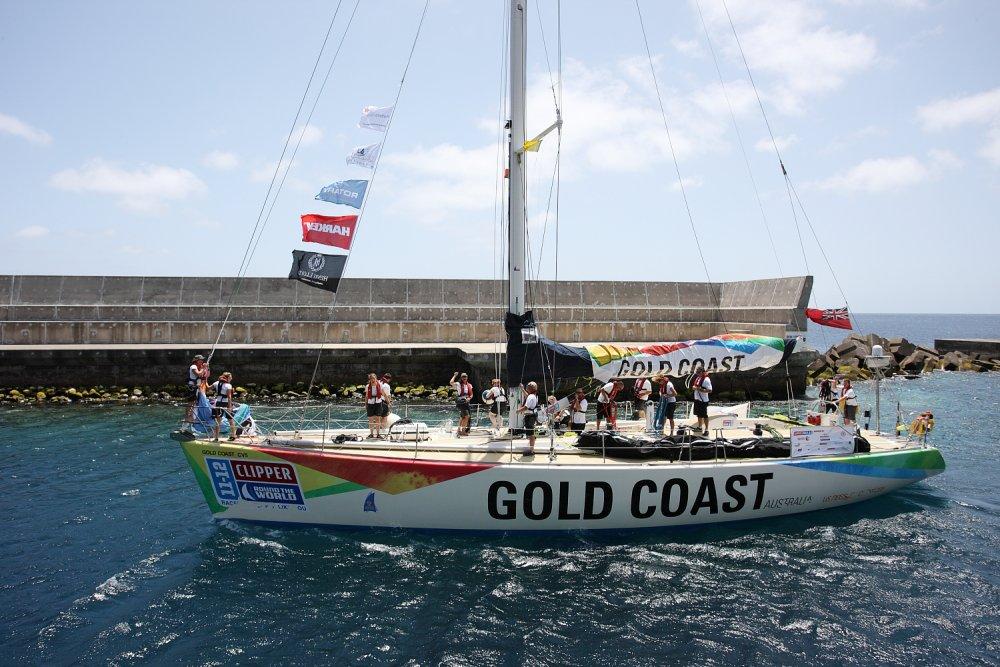 Tues, Aug 9: Gold Coast Australia, one of two Australian teams competing in the Clipper 11-12
Round the World Yacht Race, has secured victory in the first race from Southampton to Madeira, Portugal, crossing the finish line at 1337 local time (1237GMT).

For the final part of the 1340nm leg it has been a two-way battle for supremacy between the Gold Coast entry and Visit Finland. The Finnish team are set to take second place and are expected to cross the finish line later this evening.

Shortly after the team pulled alongside at the Quinta Do Lorde Marina, skipper of Gold Coast Australia, 31-year-old Richard Hewson from Tasmania said, “I feel fantastic and I’m very happy with our result. It’s great to have a podium up on the board this early into the race. It’s a great feeling.”

When asked what the secret of the team’s success was, the skipper replied, “Hard work at the start of the race; the crew and I spent a lot of time getting the boat ready and prepared.

“Tactics also played a big part; I was looking at the pressure and weather systems throughout the race and I saw a nice little bit of wind off the coast of Spain and Portugal and we basically headed over and got straight in to it.

“We had the kite up from then on, flying along at around 10 to 13kts. And finally, the third secret to our success was the amount of training we put in. The crew trained really hard for this and they’ve definitely come a long way.

“Everyone had a go at helming on the way down and considering some of these guys have never sailed before their four weeks’ training it’s just an amazing achievement for everyone,” he said.

Despite an excellent start and leading the Clipper fleet out of the Solent at the beginning of the 40,000nm race around the world, it hasn’t been plain sailing for the East Coast Australian entry.

All the teams were caught out on the first night when the wind died, forcing the crews to drop their kedge anchors to prevent their boats going backwards with the tide.

The fickle conditions continued and on day two Gold Coast Australia found themselves trapped in a wind hole and watched as the majority of the fleet sailed past. However, the competitive Aussie spirit never left them and they gradually fought their way back up the fleet until a decision to gybe east saw the team eventually steal the lead from Visit Finland.

As with all 10 teams taking part in Clipper 11-12, Gold Coast Australia’s crew come from all walks of life, all ages and have different levels of sailing experience. Lisa Blair is a 27-year-old shop assistant from Queensland’s Sunshine Coast and has flown halfway round the world to take part in her challenge of a lifetime.

Speaking from the dockside, Lisa said, “For me it really lived up to all my expectations. We were first off the line and had a slow couple of days, when we were caught by a few wind holes, but then there was the big catch-up, falling from first to ninth place and then back up to first place again.

“Sailing through the Bay of Biscay was something I was really looking forward to, I’d read so much about it and it’s such an infamous place and it really lived up to its reputation. We were freezing cold and miserable the whole time, but that’s okay because when we got through there, we just had pristine, perfect downwind sailing conditions, surfing waves. I surfed a wave at 15kts so I was extremely happy with that.

“I feel great! How could you not feel great? Being able to represent my own state and come in first on the first race has really set the bar for the rest of the round-the-world race. So, hopefully, we’ll pull in a few more firsts along the way,” she said.

Joining the friends and family members of the crew to welcome the team were representatives from Quinta Do Lorde Marina, the Madeira Wine Company and Madeira
International Business Centre, who have laid on a packed social programme for crews to enjoy during their short stopover.

After the deep cleans and essential maintenance have taken place the crew will have some time to explore the beautiful island with a jeep tour and visit to the Madeira Wine Caves and a tour round the island’s capital, Funchal City, where they will have the chance to sample the local cuisine and taste the Madeira wine that the island is renowned for.

The crews will rejoin their boats on Friday, August 12 for the next leg of the race across the Atlantic to Rio de Janeiro, Brazil, which is scheduled to start at 1630
local time (1530GMT).

Clipper 11-12 is the world’s longest ocean race at 40,000nm and started from Southampton on July 31. It will take the teams 12 months to complete and the remainder of the racecourse will take them from Madeira across the Atlantic to Rio de Janeiro and then on to Cape Town in South Africa, Geraldton in Western Australia, New
Zealand, Australia’s Gold Coast, Singapore, Qingdao in China, California, Panama, New York, Nova Scotia, Derry-Londonderry and Den Helder in the Netherlands.

Photo: Gold Coast Australia comes into Madeira in first place on the first leg of the Clipper 11-12 Round the World Yacht Race.