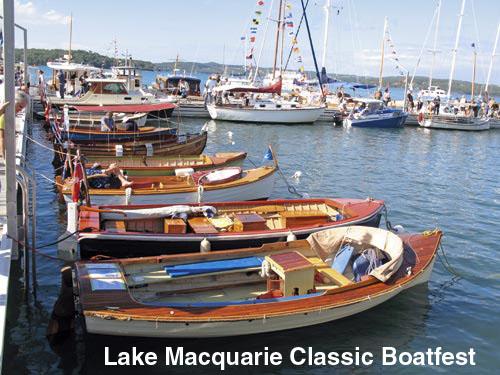 The weather gods certainly have a soft spot for yesteryear’s grand old ladies of the sea. While much of the eastern seaboard was wet and miserable over the Easter long weekend, the powers that be turned out two glorious, sunny days for the Lake Macquarie Classic Boatfest.

Previously known as Heritage Afloat, the event is now in its 12th year — held annually at the picturesque lakeside town of Toronto (NSW). While not a hard and fast rule, the Classic Boatfest is geared towards craft that are 30 years or older.

This year’s running attracted 75 beautifully-restored and maintained boats of all types and vintages along with a constant throng of admiring spectators.

The good weather lifted the spirits, as most of the boaties were keen to have a friendly chat with all and sundry. It wasn’t too hard to get an invite aboard for a closer look and possibly a quick spin ’round the lake.

HIGH-TECH, TOO
Scattered along the foreshore were a number of traders brimming with myriad boating accessories, along with everything needed to maintain or restore that classic piece of maritime history. Amusingly, the latest high-tech electric-powered boats drew plenty of attention as well.

For those not content to just spectate, there were hands-on workshops and the Quick ‘n’ Dirty boatbuilding competition — which had plenty of enthusiastic kids getting involved and getting their hands dirty.

All the way from Melbourne, David and Jenny Stott’s beautifully-presented runabout, Penguin, was typical of the smaller craft. Built by a carpenter 60-odd years ago, she features some unique woodwork, notably the grate-style perforated floor. “All those small square holes mean your feet never get wet,” says David, “as the water simply drains away.”

Penguin had sat neglected and rotting on a beach for many years and was nigh on derelict, with the deck completely gone. However, the Stott’s decided to bring her back to life and gave her a full restoration complete with a 1949 Stuart Turner two-cylinder two-stroke engine. “With all the varnish it really looks the part,” says David. “She’s a lovely boat that rides very well and there’s plenty of room.”

But it wasn’t all wood and varnish. Craig Knowles was having plenty of fun with his Skagit 20-foot Express, christened Barbra J. She’s one of America’s very first fibreglass boats and is considered a classic — especially the Express model, which uses the front screen out of the iconic 1957 Chevrolet.

This is Craig’s second Skagit, his other example is a fully-restored 16-foot speedboat he half-owns with his son, Jim. Upon finishing the speedboat, Craig visited Skagit in the US — who was initially sceptical of the speedboat’s authenticity, as they were unaware any had been imported into Australia. During the trip Craig fell in love with the Skagit brand and decided to bring back this Express as his next project.

After an extensive, 18-month restoration, Skagit themselves have commented that she’s one of the nicest of the marque in the world. Everything is original, except the two rear seats and rear splash well — she was modified from inboard to outboard (Skagit offered her in both configurations) to create more rear deck space.

INTERNATIONAL TOUCH
Many of the entrants who sailed to the Classic Boatfest reside in and around sprawling Lake Macquarie. Not so Quarter Moon —
Boatfest’s only international entry. Currently in the middle of a ’round the world adventure, she happened upon the event and was invited to join in as a late entrant.

By and large, most of the entrants were pleasurecraft including traditional sailing yachts and a number of power cruisers. One of the few old working craft on display was Curt Kappman’s Wiawera. Although her all-steel hull was fashioned in 1908, Wiawera only finished her working life about 14 years ago!

Curt’s extensive research shows that she spent much of that time around the Hunter area towing milk barges, as well as oysters up to Karuah. Curt picked her up in a very rundown condition less than six months ago and has performed a miracle transformation in that time. “There’s still a lot to go,” he says, “it’ll take another four or five months.” A bloody big effort if you ask us Curt!

Sharing honours with Wiawera as the second-oldest participant was the ferry boat Protex — affably referred to as the Soap Boat (see photo). Also built in 1908 (by the Nicholson Brothers, Sydney), the 103-year-old vessel was restored in 1999 and is now owned by the Sydney Heritage Fleet — who house her at the Maritime Museum, Darling Harbour.

Today, she’s licensed to carry 18 passengers, however, in her working days she carried up to 35 — mostly to and from the Colgate-Palmolive factory in Balmain. Carer, Ian McDonald, skited she was the fastest boat in the fleet — averaging 110kmh on the flatbed truck used to “ship” her up from Sydney.

Protex is also one of the event’s best-known boats, because she’s been coming to Heritage Afloat, and subsequently the Classic Boatfest, for around 10 years.

FULL STEAM AHEAD
One of the real standouts was Graham Knott’s steamboat Eirene. This truly striking craft, attracted an endless stream of admiring and inquisitive onlookers all weekend — most fascinated by her steam engine. The hull is a faithful reproduction of an original 1883 steamer, constructed between 1995 and 2000 for an affluent Sydney lawyer, who wanted to cruise around Sydney Harbour in stately style.

However, the steam engine itself is a far more modern incarnation. The boiler section was designed and built by John Davis around 1976, while the engine is a mid-1980s Germany piece. It’s a two-cylinder compound configuration; that is, high-pressure (120psi) steam is first fed into the smaller No.1 cylinder. Exhaust pressure from No.1 is then fed into the larger bore, No.2 cylinder. It’s capable of pushing Eirene along at 4.5 to 5kts. John is into all things steam, owning his own nearly-completed steamboat, along with a 1937 Sentinel Steam Wagon (a tipping truck).

After lighting the coal-fired boiler and a brief warm-up, Graham, John, Eirene and invited guests were out chugging about numerous times during the weekend — as well as sounding her characteristic steam whistle to the delight of the appreciative crowd.

All-in-all, the Lake Macquarie Classic Boatfest is a great event with a nice, laid-back atmosphere, friendly people and a wonderful venue. Be sure to jot it down on your short list of must-do events in 2012.

2). Built in 1936 from Huon Pine by Tasmania’s Wilson Brothers, Kintail circumnavigated the world in the ’70s. In the 14 years Peter and Julie Stern have owned her, she’s been down to Tassie twice and to Broughton Island many times.

3). Like many of the entrants, Curt Kappman, displayed the extensive research he’d complied on his 1908 boat, Wiawera, including old photos and newspaper clippings.

4). Although looking to be from a time gone by, Graham Knott’s steam boat, Eirene is a reproduction of an original 1883 steamer.

5). Breezy (left) has plenty of miles on the odometer. First launched in Taunton, Massachusetts, in1984, she was sailed singlehanded from San Diego to Sydney by Mike Hunter in 2005.

6). Although styled and presented in a traditional manner, many boats featured modern embellishments (like this pop-up sun shade) to make them more practical and functional.

7). Owned by Graham Knott (right), the key-hole boiler in Eirene, was built by retired Aussie steam engineer, John Davis (left). It’s fuelled by coal from the Blair Athol in Queensland; “The best coal in the world,” says John, “it burns with no smoke.”

8). Known as the Soap Boat, Protex was a working vessel that ferried workers to and from Colgate-Palmolive — who manufactured Protex-branded soap, hence the name and nickname.

9). Constructed by cabinet maker, John Warren, in the ’50s, David (pictured) and Jenny Stott rescued Penguin off the beach and restored the severely rotted hull back to her former glory in 2001.

10). If you harbour romantic notions of sailing off to explore exotic lands afar — like a fearless seafarer from yesteryear — then this gathering of classic sail power would have sent your heart racing.