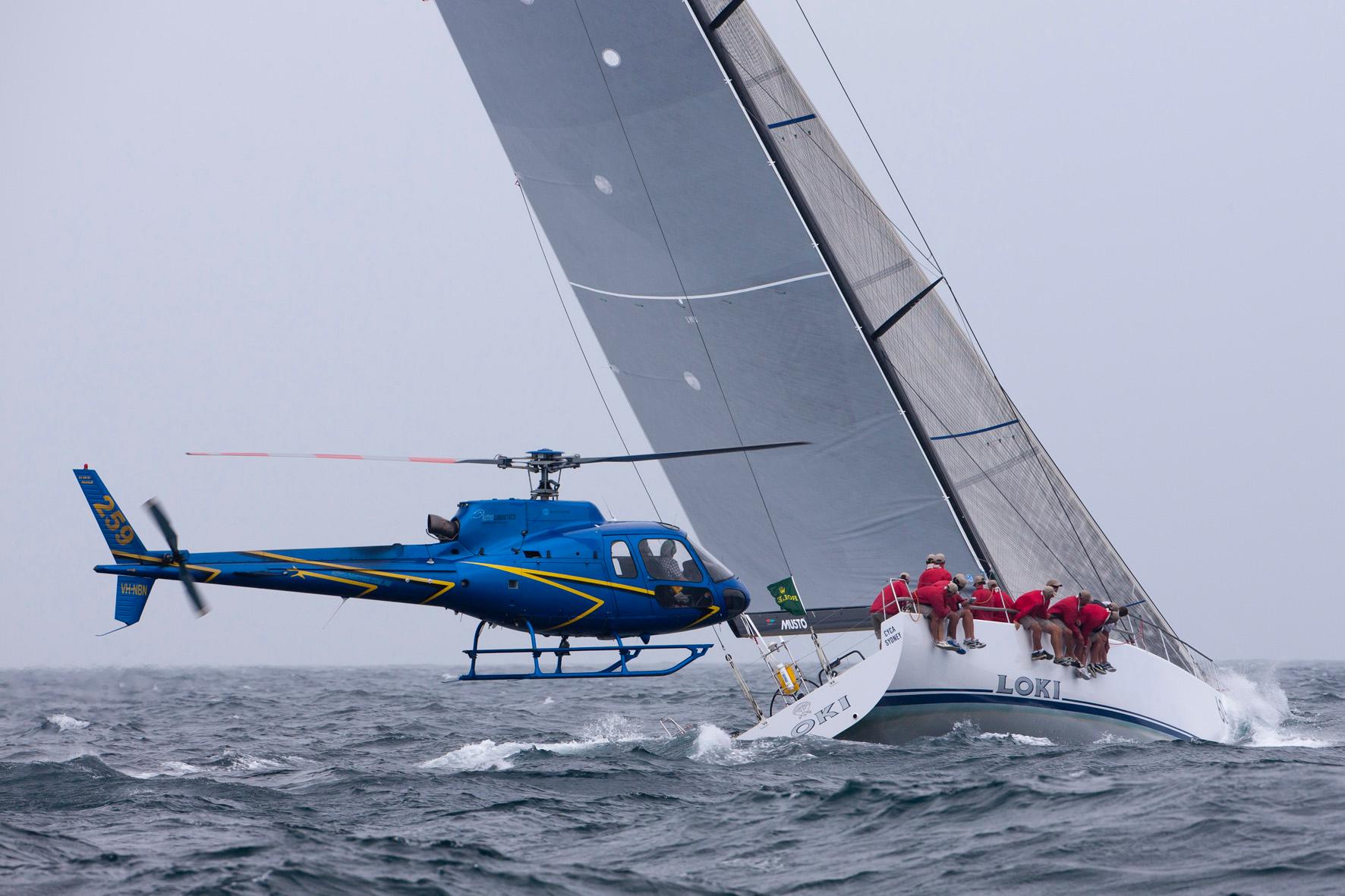 The flying skills of ABC helicopter pilot Gary Ticehurst brought ocean yacht racing, with its dramas and the exhilaration of sailing on the open sea, into the living rooms of millions of people around the world, Cruising Yacht Club of Australia (CYCA) commodore Harry Linacre said.

Flying at extraordinarily low heights Ticehurst placed his cameraman in a position to get remarkable images of the Rolex Sydney Hobart Yacht Race, which were then featured on the evening news bulletins throughout the nation between Christmas and New Year.

“Over a quarter of a century he played a significant role in expanding the media coverage of our great ocean race, the Rolex Sydney Hobart,
a race for which he developed a personal passion,” said Linacre.

“In particular, Gary will be remembered for his professional calm during the tragic storm that hit the 1998 Sydney Hobart fleet; he reported the positions of so many yachts in distress, resulting in the rescue of at least 25 yachtsmen from sinking vessels or liferafts.

“Gary covered 25 Sydney Hobart Yacht Races, always demonstrating a passion for the ocean classic. His understanding of the sport and the way yachts performed in all types of conditions allowed him to place his chopper in positions that allowed his cameramen to capture some of the most remarkable images of offshore yachting in Australia,” he said.

Commodore Linacre stressed the key role that Ticehurst had played in the 1998 race: “His calm professional skills in flying and communications saved the lives of at least 25 yachtsmen in that tragic storm that unfortunately saw the loss of six men at sea.

“At that time, there was a transition going on between analogue and digital telecommunications and because the marine radio network was being inundated with mayday calls; Gary used his mobile telephone to give the co-ordinates of yachts in distress directly to the Australian Maritime Safety Authority in Canberra, which was coordinating the search-and-rescue operation.

“Flying dawn to dusk he continued the search for Winston Churchill and her crew who had taken to liferafts, spending long hours flying low over the sea, at times when waves where reaching between 75 and 100 feet.

“I understand the American Helicopter Pilots Associations gave Gary a special award for his involvement in the rescue efforts,” he said.

In an interview before the 2007 Rolex Sydney Hobart,
Ticehurst recalled being able to fix the position of each yacht in difficulty in the 1998 race and direct the search-and-rescue operation to the scene. “We were there to reassure the yachts that help was on the way,” the veteran pilot said. “Even today, a mayday over the radio sends shivers down my spine.”

Ticehurst and his flying partner Richard Howe, through their company Film Helicopters Australia, covered the race each year for the ABC television network, also providing the ‘pool feed’ of race footage to other television networks in Australia and overseas.

Ticehurst also assisted the CYCA on many other occasions during the Sydney Hobart, including standing by when the maxi yacht Skandia capsized in 2004 and the vintage yacht Koomooloo foundered in 2006.

He hovered over the yachts to ensure that all crew had taken to their liferafts, co-ordinating the rescue efforts between AMSA and the Tasmanian water police.

“The media team would regularly talk to Gary during a race as he passed on news from out on the Tasman Sea,” said Campbell. “He was a great pilot who had a passion for ocean racing, but only from the air. I don’t think we could ever get him on a yacht.”

Friend and print media photographer Ian Mainsbridge said: “He was a great friend, a fearless pilot and a legend in the film industry in assisting with helicopter stunts.

“I have not only flown many miles with Gary but also flown in the News Limited chopper alongside the ABC aircraft and knew his extraordinary skills as a pilot who knew exactly where to get the best possible news shots.

“He pioneered the tricky manoeuvre of lifting cans of film from yachts, which were carrying a cameraman during the Sydney Hobart, bringing the bluewater classic to the television screens for the evening news bulletins.

“It is ironic that a pilot who had so many hours flying over the ocean had died in the desert of inland Australia,” Mainsbridge added.

ABC journalist Scott Alley, who flew with Ticehurst in four Sydney Hobarts, said: “He had no peer in his operational flying skills… and he had an absolute passion for the Sydney Hobart.”

Ticehurst learned to fly helicopters with the Australian Army, later helping set-up the NSW Police flying wing. He was a technical advisor for several films and is believed to have been the only pilot to land a helicopter in Sydney’s Martin Place.

“On behalf of the CYCA and its members, we extend our deepest condolences to Gary’s wife Theresa and their children Michael and Michelle, and to the families of Paul Lockyer and John Bean,” he said.

Photo: Gary Ticehurst flying one of his helicopters into a commanding position for onboard photographer Ian Mainsbridge to capture images during the Rolex Trophy Series 2010 off Sydney. (Photo by Andrea Francolini).