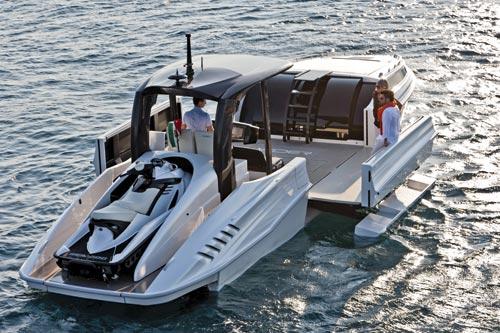 The brainchild of former Pershing boss Tilli Antonelli, with design by Fulvio di Simoni, the Wider concept involved taking a 12.9m open sportsboat and adding extending wings that, at anchor, increase the deck space in the midships area while also adding considerably to at-rest stability. The first model is now on the water and I am happy to report that the finished product works exactly as advertised.

The prototype is fitted with twin 480hp Cummins diesels (twin Yanmar 370s are available as an option), which deliver a top speed of more than 50kts, thanks to a stepped vee-hull. With a twin-berth cabin forward, a T-top over the helm and even a jetski bay aft, at first glance she cuts the mustard — and there is more innovation hidden around the helm, where the dials and switches are located in the centre of the wheel.

Of course, the real question is whether the fold-down bulwark concept works in practice. It does. Cockpit space is significantly enhanced, and while the seas were calm for the trial days the floats do seem to make a difference in steadying the hull. The one question I have is whether, over time, the various elements that make up this innovative system will start to rattle annoyingly, but there’s no doubt that the Wider 42 is a truly original product that, hopefully, the market is ready to embrace. — Tim Thomas