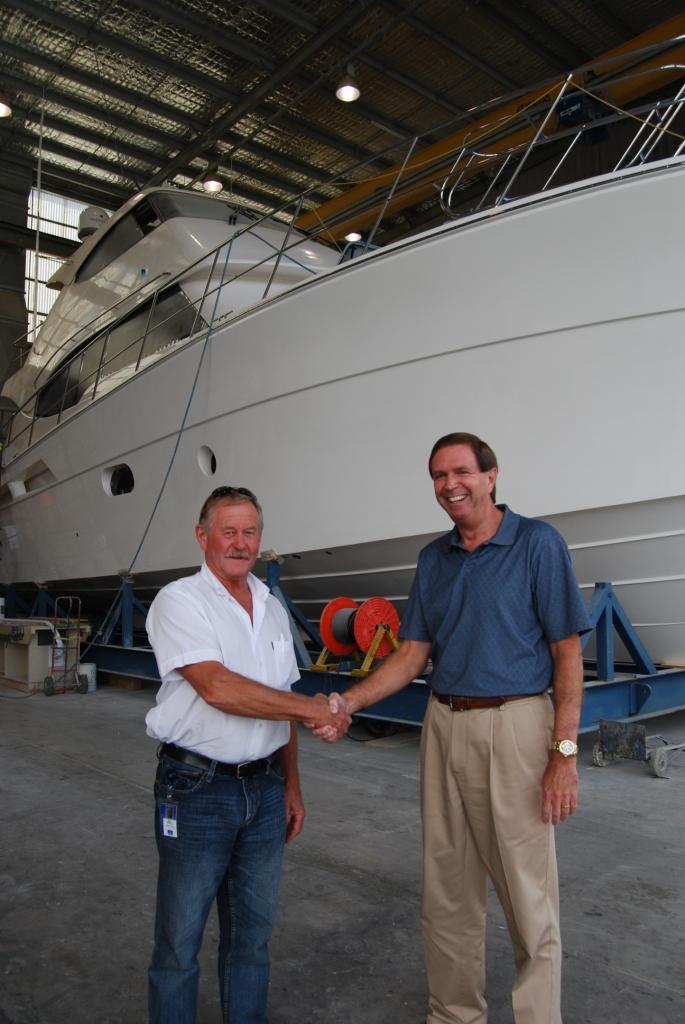 Riviera recently signed its first order for the new 75 Enclosed Flybridge bound for New Zealand in May next year. This new model follows hot on the heels of the recent launching and export of the Riviera 70-foot Enclosed Flybridge, which will be delivered to her new owners in Spain later this year.

This was the sixth of the $5 million plus luxury cruisers that Riviera have built and launched in the past three years and will be the first Riviera 70 in Europe.

The new 75 will feature a larger cockpit and flybridge than the 70 Enclosed Flybridge, making it Riviera’s new flagship model and the largest semi-production flybridge boat built in australia.

“The beauty of this vessel is that it is a self-contained luxury home that can take you anywhere in the world, as it has its own fresh watermaking system and twin generator sets to supply all the power needed to live aboard in absolute luxury,” said Wrench.

“There is sleeping accommodation for up to 12 in four separate cabins — each with their own en suite — an aft galley centrally located between the cockpit and saloon, which opens to the mezzanine alfresco dining area through a large awning window and stainless steel and glass door. The aft galley positioning can also easily serve the flybridge.

“This new design will be a winner for Riviera as it features even more entertaining space and is ideally suited for long range cruising,” he said.

“It’s a trend that we are now seeing return as Riviera owners are wanting to move up to a larger model with more accommodation and the latest technology. Many of our owners want to travel farther afield and stay aboard for longer periods of time. The 75 is certainly the ultimate Riviera in this regard and the largest boat built by the Australian yard in its 30-ear history,” said McGill.

“R Marine New Zealand has introduced more Riviera 58 and 60 flybridge boats into NZ than any other single market in the world and we intend to have more 70 and 75 flybridges than any other individual market as well.

“In NZ, we are blessed with everything boating at our fingertips so we can partake in big game fishing and beautiful coastal and island cruising.

“The Riviera flybridge design adapts effortlessly to both worlds with luxurious creature comforts and appointments as well as being a practical sportsfishing boat — absolutely the best of both worlds,” he said.

“The new 75 is an evolution of our relentless innovation and we are always striving to design and build better boats with each new model we create,” said Dowd.

Stepping up from the expansive cockpit measuring 5.53m beam x 3.3m, the riviera 75 features a mezzanine alfresco dining area located in the protection of the flybridge aft deck. As you move through the glass and stainless steel door with huge opening window there is an aft U-shape galley to port and a straight-line internal staircase on the starboardside leading to the enclosed flybridge.

The galley is equipped with a four-burner electric induction cooktop, two refrigerator units with two drawers each and a two-drawer freezer unit. There is also an under-bench dishwasher. To the starboardside, a wetbar area houses lift-up glass storage, icemaker and a further two drawer refrigeration units.

One step up from the galley is the L-shaped lounge, which can comfortably seat eight and to starboard is the dining area, with seating for eight around a timber freestanding table. Forward of the dining area on the starboard side is a utility room equipped with separate washing machine and dryer and a multi-zone temperature-controlled wine cooler.

Forward and down the wide companionway, the accommodation includes four cabins with the master stateroom aft beneath the saloon. The stateroom runs the full beam of the boat amidships, with fixed portholes on either side. A king-size double bed is flanked by bedside tables. His and hers walk-in wardrobes are built in on both sides of the stateroom. The en suite features quality quartz-tile flooring and a marble/quartz benchtop with porcelain bowl. A separate shower stall has a frameless glass door and a teak seat. An opening porthole is recessed into the hull to allow light and fresh air into the en suite bathroom.

The forward accommodation on this first 75 includes a triple cabin to port, a triple cabin to starboard and a forward cabin featuring a queen-size island berth.
However, the accommodation layout can be changed to suit, for instance the forward cabin can include four tournament bunks in lieu of the queen-size island berth or split into two double bunk cabins.
The port cabin can be customised as a study.

Seating in the fully enclosed flybridge includes a central helm chair with two companion chairs (one either side) and a large L-shaped lounge to port with table facing a wet bar/small galley and entertainment unit. A large external viewing platform aft has seating for up to three people with a rear helm on the starboard side.

The 75 is fully air-conditioned throughout, including separate units for the flybridge, saloon, dining area, galley, all cabins and bathrooms.

Riviera expects to launch the new 75 Enclosed Flybridge in May 2012.

The engine options are two Caterpillar C32s at 1825hp each or two 1940hp MTUs and performance approximately 31kts.