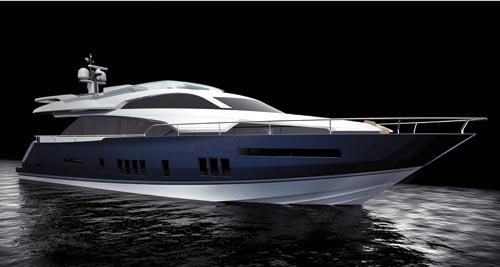 With the Squadron 78 having proved such a hit with the boat-owning public — some 85 of them will have been built by the time the model’s nine-year production run ends this year — it was no surprise that Fairline would look to capitalise and develop a new flagship for its range. When development work commenced back in 2007, the idea was for an 85-footer, but the subsequent recession and other factors meant that the project was put on the back-burner while the marque concentrated on its smaller offerings.

Now the flagship is back in the form of an 80-footer, but this is no simple refresh of the existing 78. “None of it is a rethink of the 78,” confirms Fairline CEO, Derek Carter. “The 80 is a fresh look at how we could produce an 80-footer with significantly larger volume than the 78, while retaining husband-and-wife or two-people handling.”

“The 80 offers 28 per cent more volume than the 78,” explains Fairline’s chief designer, Andrew Pope, as we walk around the full-size wooden mock-up in one of the boatbuilder’s workshops. “This is partly due to beam being increased by half a foot, partly down to how we have dealt with things like the hull tumblehome, etc, and partly because we have also made some of the engineering elements more compact.”

ISLAND GALLEY
What is particularly notable walking through the interior is the vast expanse that the main deck offers. This area is completely different to the 78, set on one continuous level rather than the stepped-saloon, and with an unusual galley arrangement. On the 80, this takes the form of an aft-facing U-shaped island forward, which can be kept open plan, divided from the saloon itself with raising screens, or closed off entirely if desired.

“What we’ve done with the galley is a big win,” Pope enthuses. “It is usually at one end, or to either side, and it interrupts the size of the boat. Here, the galley takes centre stage.” It helps create a vast main-deck social area, coupled with flexible seating and dining arrangements thanks to a lack of bulkheads or fixed furniture.

To add to the incredible sense of space, the main deck features huge side windows that remain uninterrupted by superstructure elements, and these four 3m windows can also be dropped into the superstructure to create a large, open and airy space.

“It will be almost like there is no glass at all,” says Pope. “Along with a glass aft bulkhead, we have really tried to make each area work and breathe with each other.”

Big, aft glass doors also slide away to create a generous inside-outside living area, to create what should be a really impressive space, and the cockpit itself is fully customisable in terms of furniture, bar and seating layout.

The interior helm is forward and to starboard, and is smaller than might be seen on similar yachts — the emphasis has been on creating a flybridge helm that will act as more than a mere convenient add-on for driving and maneuvering. Interestingly, Fairline is working with Italian company Besenzoni to refine a main-deck bridge wing door that, rather than opening out on a pantograph system — which tends to block sidedeck access — will be formed of an inner and outer skin that will compress, allowing the door to slide backwards into the main superstructure.

Below decks, the guest accommodation has been kept on a level above the hull chine meaning that you will be able to stand right outboard. The mock-up is based on a four-cabin arrangement although considerable variations will be possible, but the upshot is that the guest cabins will offer both decent space and prodigious amounts of natural light.

LOOKING AHEAD
“We have focused on getting as much light in as we can,” says Pope. “For the master cabin forward, we wanted something different that would have no intrusions from stringers or the like. The cabin also has full-length hull/deck windows that mean you can stand aft and be able to look out forward.”

The flybridge will extend right to the aft end of the cockpit, making for a huge platform up top to enjoy cruising and relaxing.

“We have put the helm as far forward as we can,” said Pope, “and the flybridge galley will also include stowage for crockery and so on, so you won’t have to bring anything up from below. There will also be space for a 3.85m RIB on the aft end of the flybridge.”

The aft platform folds out from 4ft to make an eight-foot platform that can also be lowered into the water as a high-low beach platform, but perhaps the most impressive space aft is the crew cabin. Set into the transom with a huge stern window offering what Pope describes as “an epic view”, the cabin can be arranged to cater for between one and four crew. Set on a single level, it will offer 6ft4in headroom throughout.

The first Squadron 80 is due to launch sometime in 2012, and the price point will be, according to Carter, “somewhere north of £GB 3 million.” While little has been written in detail on the 80 — I was the first journalist to see the mock-up — its innovative design and impressive layout has obviously caught the imagination of several clients, Fairline taking orders for six Squadron 80s already.