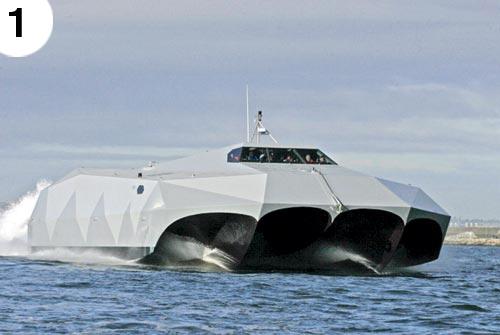 Recently, I reported in Trade-a-Boat

magazine on the unique features of the Axcell 650 and in particular, its engineering that allows it to behave much like a hovercraft to get the boat up on plane much faster and easier than with conventional horsepower. Called an Air Supported Vessel, or ASV, the design seems to be getting some attention.

The most extreme version is from San Diego, California-based M Ship Company.
Founded in 1998 by Chuck Robinson and Bill Burns, M Ship is a service-disabled, veteran-owned small business specialising in the design, development and delivery of innovative marine concepts for the military, commercial and recreational markets.
To say they are inventive falls far short of the reality of their products.

Case in point: the M80 Hull. Known as The Stiletto, the twin M-hull vessel is 88 feet long with a 40-foot beam, providing a rectangular deck area equivalent to a conventional displacement craft 160 feet in length. The craft’s draft fully loaded is 3ft and is designed for a speed of 50 to 60kts.

Right now, it’s in military and drug interdiction use but I don’t think it’s too much of a stretch to see a yacht version slipping down the ways.
According to the M Ship Company, the M-hull’s advanced planing-hull technology provides superior advantages over the more traditional designs.

The M-hull’s geometry is unique because it consists of three interrelated features that improve ship performance — the Central Displacement Section, the Planing Tunnels and the Rigid Skirts. These include ride quality, speed, stability, range and the ability to carry payloads. The reduction of the “drag hump” offers very efficient cruising speeds not normally associated with planing craft and M Ship has done extensive studies with government and academic support in order to validate these benefits. Its test data and video are available upon request.
(Go to www.mshipco.com).

Next up in this slightly different approach to moving through the water is
by Effect Ships International (ESI) AS of Sandefjord, Norway, who have come up with a prototype they call the M65. And here’s where you have to put in some visionary work and ignore the boxy, unadorned test vessel pictured hereabouts.

Think top designers having a go at both the exterior and interior.
With that said, ESI has sunk some $10 million into its research and development of the M65, garnering the Innovation Award at the 2011 European Powerboat of the Year contest.

In a nutshell, the concept calls for a special underwater shape to the running bottom of the hull complete with a large cavity to trap the blown-in air, courtesy of a fan mounted in the bow that draws in air via vents on either side. At the stern, a special flap closes off the cavity, trapping the air within.

For this prototype, ESI used a fan driven by a D3 Volvo Penta diesel but envision using electric power from a genset or from a hybrid
main propulsion system. According to Ulf Tudem, the company’s general manager, the propulsion system can be pods, jets, outdrives, fixed-shaft, or surface piercing.
When the main propulsion system is engaged, the M65 accelerates and gets on plane much faster than conventional boats because it doesn’t need to get over the proverbial hump. (Go to www.seseu.com). — Capt Ken Kreisler

Photos: Getting air, the American Government’s Stiletto (photo 1), is an ASV or Air Supported Vessel, as is Norway’s experimental M65 prototype, seen here (photos 2 and 3) during recent sea trials.