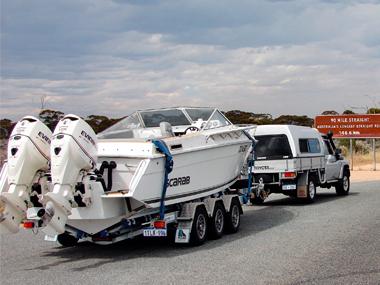 You know that “what have I got myself into” feeling? This time it was easy, blame Roger Dickeson!

A mild-mannered man, Roger has a passion for 4WD and adventure. He competed for a while in a very “original” Range Rover before becoming involved in many rallying events including the Australian Safari Rally. However, having a naval background, his focus gradually veered to the idea of creating a similar long-distance event for powerboats. Thus the idea for the Australian Offshore Challenge was conceived.

The first Offshore Challenge-Bass Strait Rally materialised in 2007. Amazingly, Roger received criticism from some quarters within the marine industry. “Another dreamer trying to get into something he knows nothing about,” was the tone of one editorial comment. My view was: here is something new, a fresh idea, surely the media and industry should be encouraging and supporting an alternative to the national bloodsport, which seems to be the only reason many can think of for buying a boat!

Isn’t this what sportscruisers in Australia are designed for? My first reaction was to contact Roger and find out what the proposed event was all about. I guess the first rumblings of what became the Global Financial Crisis were stirring at the time; that fact and what Roger feels is a Bass Strait “scare factor”, kept the pioneering 2007 fleet to six boats.

At the time, I had a Sunsation 288 and I was unable to do the whole event. I instead joined the fleet three days later at Port Welshpool. The impression at the time was that the event was enjoyed by all, it generated great camaraderie, and a superb closing party suggested that it was a great success. There was, of course, some discontent and criticism.

It’s a sad fact that powerboat ‘events’ are few and far between in Australia. The US poker-run circuit is a spectacular indulgence of cool boats and hot socialising. Australia has only two (East Coast) poker-run events and neither has yet generated substantial support. Note here that Poker-Runs Australia has great support in Perth, WA. How can it be that we have the best climate and the best boating waters and yet we are not out there living the life?

Let’s get this clear, the Australian Offshore Challenge events, which are now evolving into a series, are not races. The concept is more in the style of a rally, where basic navigation and timing consistency are rewarded with points. Good seamanship, beach cricket and a passion for eating and drinking will help in fully enjoying the experience — not to mention visiting places you would never have considered exploring alone.

You can pick the average speed you feel you can manage each day and while given all the required charts and the waypoint coordinates, you can simply punch these into your chartplotter and join the dots. It is a great opportunity to develop navigation skills and nurture a sense of achievement, all in a relatively safe, controlled environment — in fact, much of it in pubs!

And so to 2011. Needless to say, “that GFC thing” effectively stifled any further event considered since 2007 — but the die was cast and thankfully Roger was determined to revive it as soon as feasible. So a new promotion started in mid-2010 and interest came from all over Australia. I was without a boat but offered my services. Instead, Roger put me in touch with Campbell Durrant from Perth, he was without a navigator and a partnership was formed.

I volunteered to take on the first challenge of hauling the Team Biomax Scarab 26 across the Nullarbor to Melbourne in 43°C heat, while my partner back at Airlie Beach was facing Cyclones Anthony and Yasi. Fortunately, we both came through unscathed.

The patrons of the Wrest Point Casino in Hobart witnessed a fleet of eight boats assemble under a high-pressure system, setting off for Melbourne via the scenic route along Tasmania’s East Coast.

The D’Entrecasteaux Channel around Bruny Island was easy, but the swells in Storm Bay were the entree to confused seas that guarded the spectacular entrance to the Port Arthur inlet – and my first “what am I doing here” moment!

My time-prediction was blown to bits on the first leg and thanks go to the girls at Felons Bistro (Dine with Conviction) at the historic convict settlement, for reviving my spirit.

Battling the chop on the swells to pass Tasman Island the next morning gave way to a smooth run to Triabunna, only interrupted by a leisurely lunch in a bay behind Maria Island. We started to appreciate the beautiful cruising waters available in Tasmania. This was pure bliss.

The Freycinet Peninsula and a peaceful night in Coles Bay preceded a smooth cruise to St Helens via Bicheno. More fuel, awesome fish and chips and another good night’s sleep, then next morning a Coastguard escort to safely cross the estuary bar.

Now the serious crossing of that notorious Bass Strait would begin. We settled for another smooth cruise to Eddystone Point and lunch anchored off the Passage Islands just south of Cape Barren Island. Yes, this was all just too easy and we were having a ball!

The wreck of the barque Farsund on the sand bar protecting Vansittart Island brought comment over the radio that the vessel was in fact a contender in the 2007 Offshore Challenge! Pulling into the little port of Lady Barron on Flinders Island, we adopted the Furneaux Tavern as the base for the eating and drinking indulgence. I have to say, the locally-grown produce and wine served at the Furneaux is surely world-class, made all the more palatable by reasonable prices and an enthusiastic welcome from the Island’s lady mayor.

The next day, we emerged from the island's protection into an unfettered swell made more interesting by a stiff breeze. Adding to this, the anger of the tide race around Cape Franklin was some concern for the little tinnies in the fleet.

Those among us who appreciate such things found the stop-over at Deal Island fascinating. A great feeling of remoteness was enhanced by virtually fearless wallabies; close encounters with Cape Barren Geese; fairy penguins and plenty more creatures to tax your knowledge, topped for me, by a fiery little bird which Greg Farr identified as a scarlet robin.

Setting out at dawn on Monday — on what turned out to be the last leg — from Deal Island to Refuge Cove at Wilsons Promontory and then onto Port Welshpool, we could have towed a skier.

Long gentle swells were the proverbial “calm before the storm” because the next day brought the predicted low-pressure cold front and howling wind. We had made it across the Strait but Melbourne would have to wait. Most crews found beds ashore and Welshpool’s Pier Port Hotel became event HQ as we waited for good news. Alas, the good news never came and by Thursday the consensus was to call it a day, hold the awards party and head for home.

The major award was taken by Alan Latta, navigator of the 36 Sunrunner Captain Chaos and the Spirit of the Challenge award went to the crew of Grey Pearl, Tony Johnstone and Mitch Raspin. There really should have been a “most entertaining crew” award presented to “I’m gonna frow me bruvver overboard” Joe and Bomber Jetson, God bless 'em!

I'll be joining Roger and co to help with the next event from the Gold Coast to Whitsundays, including some reef islands, scheduled for August/September this year. Yes, get your entries in now, it will be awesome!