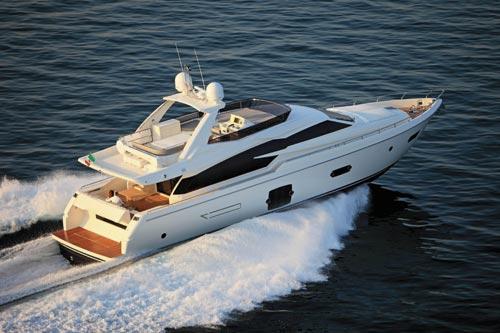 With Ferretti unleashing a barrage of new designs in its popular lower size range over the last couple of years, many of us in Europe have been waiting keenly to see what the end result would be.

First up was the new 800, delivered with what seemed a specific aim to add a more sporty line to the brand’s offerings. This was followed by the 620, which came in just a little short to take advantage of the full sporting profile.

Enter the 720, which has just taken to the water — and what a yacht she is. “When we started work on this new design, we had the choice of coming down from the 800 or up from the 620,” says Christina Barbato from Ferretti’s Advanced Yacht Design team. “We chose the 800 as the starting point. We have made subtle improvements to the styling but the focus has been on the performance.”

This has led to using a pair of the latest MTU 2000 M93 engines which, on our sea trial, pushed the yacht to 34kts — a solid speed for a performance cruiser. What really struck, though, was the flexibility of the hull across the range, sitting comfortably on the plane at 15kts and cruising happily at 25kts. Handling and helmsman feedback has not been neglected either, with the 720 using ZF’s latest fly-by-wire system complete with force feedback through the wheel.

Below decks, Ferretti has tried hard to introduce a modern, minimalist style. Accommodation on the lower deck follows convention, with a VIP forward, a master cabin aft benefiting from huge hull windows, and two twins in between, all with their own en suites, while on the main deck the aft saloon is separated from the galley and helm area forward by means of a sliding door.

The highlight of the social spaces is undoubtedly the flybridge which, at a prodigious 32m², offers plenty of space for sunbathing, dining and relaxing. In fact, such is the space up top that it almost renders the forward coachroof sunbathing area redundant.

There’s no doubt that the refreshed Ferretti range meets the expectations of a new clientele after more sporty, aggressive lines, and the good news is that the 720 doesn’t disappoint on the water.
— Tim Thomas