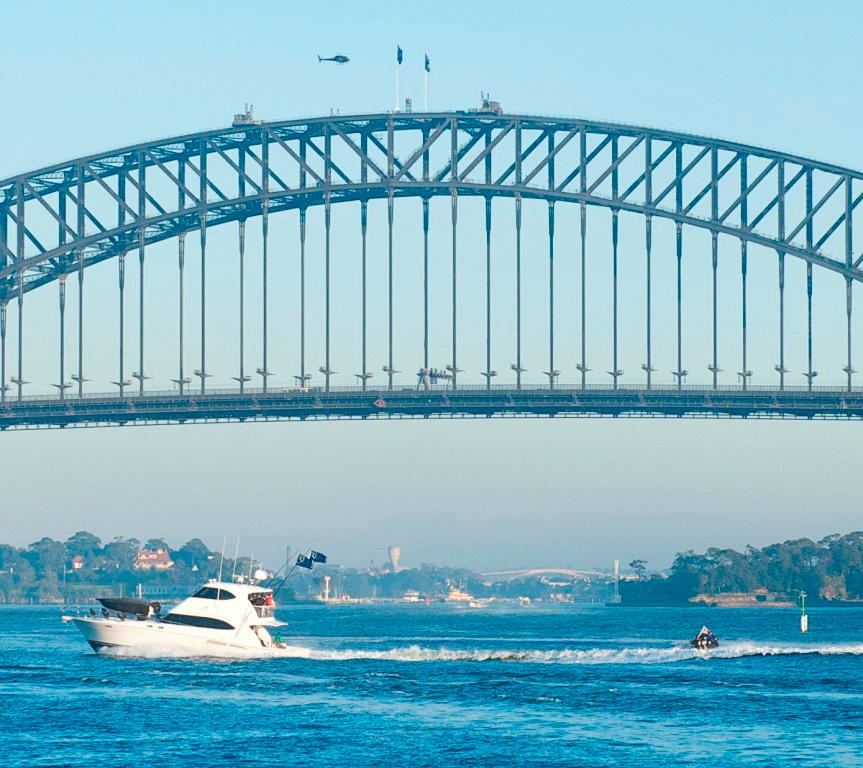 The $2.5 million cruiser is the latest model from the Australian yard and the promotion heralded the boat’s debut at the Sydney International Boat Show, which opened doors yesterday.

Event organiser and former Australian waterskier Darren Osmotherly from Paradise Afloat Houseboats on the Hawkesbury River said this was an Australian first and a one-off event.

“It’s been a big job to organise with a lot of risk assessments and consultation,” said Osmotherly.

“This year the Ski championships/World Titles will be held in Moreton Bay, Queensland in September so this is an exciting opportunity to showcase the Australian ski team talent behind an Australian boating icon.”

One of the 15 waterskiers is Danny Cropper, who will represent Australia at the World Titles this year and is also a multiple Bridge to Bridge winner and world record holder for skiing the 112km Bridge to Bridge race twice in one day.

Riviera owner Scott Taylor generously donated the use of his new 61 series II Enclosed Flybridge, Mazara, to celebrate the Sydney launch of this new model.

As founding principal of the FleetPlus Group, Taylor is a multiple Riviera owner having previously had a 27, 36 Pro Sport, 39, and 42.

He said he was thrilled to be involved with the Sydney launch of the new 61 Series II Enclosed Flybridge.

“We love our boat as it combines style, capability, capacity, and of course when you see it, the ‘wow factor’ like no other,” said Taylor.

“I chose to build a boat made in Australia because of Riviera’s quality, reliability and of course for the fact I love to spend my money in the communities from which I operate my business, which is Australia and New Zealand.

“We were very much involved in the build process in consultation with Riviera Pittwater and the factory.

“My partner, Rebecca, and I use our boat more for lifestyle these days but we still fish competitively at our chosen events with Rebecca and I holding various records through our successful campaigning of competitions,” he said.

Taylor and his executive team also understand the importance of helping those in need and recently partook in the CEO Sleepout, raising more than $40,000 for homeless people.

Scott said he looks forward to seeing his 61 Series II on display at the Sydney International Boat Show.

The new Riviera 61 Series II will makes her Sydney debut at the 2011 Sydney International Boat Show and with three of these new models currently under construction for owners in Australia and Central America, Riviera anticipates this model will be extremely well-received by boating aficionados.