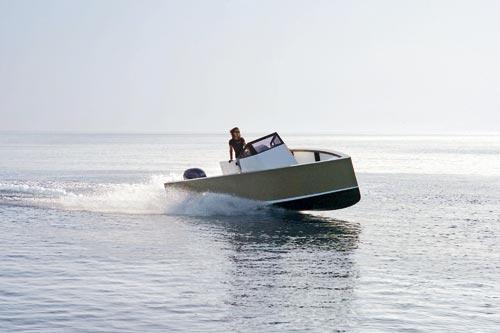 When a new builder enters the market, you might expect it to take some time to gain traction with potential customers, but French company Smartboat seems to be proving that there is an exception to every norm.

The brainchild of Smartboat’s Hedy Kardous, Olivier Dupont Delestraint and Frederic Meunier, Smartboat is a 7m fast, robust launch/dayboat with a cabin and head combination accessed through the steering console, and also offers a selection of biminis and seating arrangements.

The hull was designed by VPLP’s Vincent Lauriot Prevost, and production began at the back end of 2009 at the MC-TEC yard in Tunisia, which has already developed something of a reputation for the construction of the Class 40 offshore racing yachts.

Smartboat says it sold an astonishing 50 Smartboats at the Paris boat show last December, with a further 20 orders coming at the Dusseldorf show in Germany at the end of January. Moreover, Hedy Kardous confirms that the 100th model will be delivered at the Cannes Boat Show this September.

The incredible demand means that Smartboat has expanded its sales operation worldwide — and has also developed plans for a 30-foot version. And if you want to see one in action, a model could be near you soon — the company is supplying the official race support boat for the 2011-12 Global Ocean Race, and will have a fleet of Smartboats at all the stopovers around the world.

Photos: Smartboats are from France, and
an instant
hit in Europe.