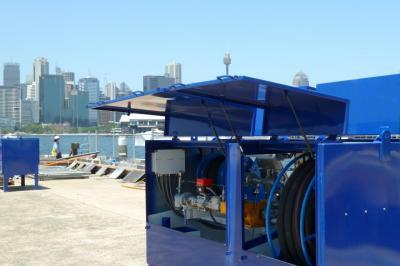 With limited infrastructure development within the harbour over recent years, Baileys Marine says before White Bay 6 recreational boat owners were limited to using old and in many instances, sub-standard fueling facilities.

Costing $7 million, the marine fuel outlet has a total capacity of 440,000lt delivered through high-flow fuel lines, which Baileys Marine says will ensure a consistent supply for any and all types of boats.

Recreational boat owners have deep-water access to three fuel pumps at the eastern end of White Bay 6, as well as sullage and oily-water disposal services.

"When we were first presented with the opportunity to be involved at White Bay 6, we undertook extensive local consultation to understand the challenges facing local recreational and commercial boat owners so that our facility would deliver to their needs," said Guy Bailey, White Bay 6 managing director.

"It became very clear that the harbour needed a facility that could offer consistent fuel supply, at competitive prices, and always with the preservation of the Harbour as the priority.

“I'm delighted to say that White Bay 6 delivers that, and in future will become a central marine fuel and service location,” he said.

Baileys Marine says it has developed a reputation for investing in and building state-of-the-art marine fuel service facilities around the country, for commercial and recreational boat operators.

It is with this experience that it embarked on the White Bay 6 project working in conjunction with the BIA, Sydney Harbour Foreshore Authority and local residents to ensure the highest ecological standards were adhered to.

Baileys Marine said it went one step further by designing and operating White Bay 6 under international standard ISO 14001 (Environmental Management System) to ensure the protection of the Harbour and surrounds.

Due to its national buying power, Baileys Marine says it can offering the highest quality fuel at competitive prices, which is another reason for Sydney boat owners to visit the new outlet.

White Bay 6 officially opened on Thursday, April 7, and provides 24/7 commercial refueling, and recreational fuel services from 5am to 10pm (manned 7am to 6pm), seven days a week. Fuel can be purchased using credit card or Baileys Marine fuel cards at the bowsers.