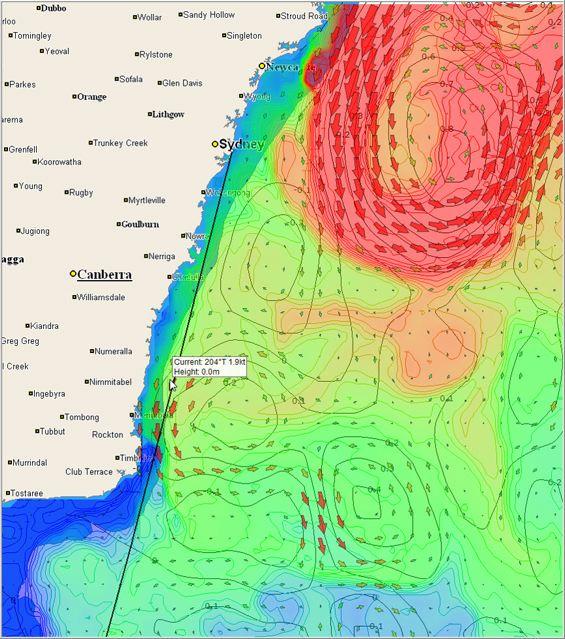 Ocean currents and sea-surface temperatures off the NSW coast are looking very interesting in the lead-up to the 2010 Rolex Sydney to Hobart Yacht Race.

In a similar fashion to last year, a large eddy of warm water is forming offshore, which indicates strong southerly surface currents. With favourable wind, this potentially means massive gains for canny competitors.

The forecasts have been made by Australian-based company Tidetech — an international provider of tactical oceanographic data. The company said its comprehensive resource of detailed and accurate oceanographic data is compiled by internationally-recognised scientists and is produced in formats compatible with a range of tactical/navigation software packages, making it ready-to-use by sailors and other maritime users.

Tidetech director Penny Haire said over the past few days the currents to the northeast of Sydney had changed quite rapidly as a huge and powerful warm eddy was pushing its way south.

“We expect this eddy to continue moving south, which will have an immediate impact on tactics after the boats depart Sydney Heads,” said Haire.

“Skippers will have to decide whether to be bold and go offshore to get maximum benefit, or be conservative and stick close to their competition.

“It’s Tidetech’s job to provide navigators with the best possible information so they can make confident decisions,” she said.

According to Tidetech, the 2009 Sydney to Hobart IRC overall winner, Two True, used its data to advantage. Heading farther east than any other vessel, Tidetech said the team made the most of strong southerly currents and won the race.

Tidetech said its data has been used in many other regattas and races including the Melges 32 World’s, Rolex Big Boat Series (San Francisco), Sevenstar Round Britain and Ireland Race (the data was also used in the popular online game, Virtual Regatta, for the same race) and many others as far back as the 2008 Sydney to Hobart.

Tidetech added that it is also in the running to provide oceanographic data to the forthcoming Volvo Ocean Race and 34th America’s Cup.

Available as a subscription, Tidetech data is downloaded into onboard navigation software. With detailed graphical presentation, users can select the information they want displayed including ocean current strength and direction, sea-surface temperature and tidal streams. The data is presented in GRIB format, which is compatible with the more popular race navigation and tactical software packages.

Within the next year, all Tidetech products will be developed for use on mobile devices such as iPad and iPhone and will also be integrated with a growing number of navigation systems.

Tidetech’s products are also available for use in the 2010 Melbourne to Hobart and Launceston to Hobart races.