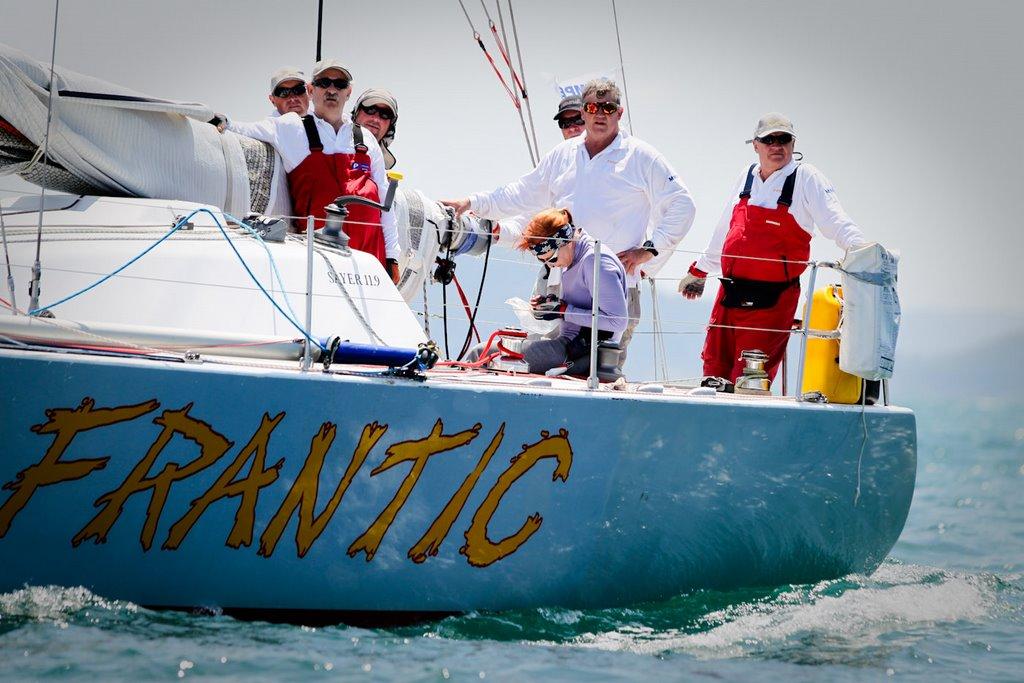 1630 November 3: A search aircraft from Lord Howe Island late this afternoon located the ‘missing’ yacht Frantic, which had been competing in the Hempel Paints 37th Gosford to Lord Howe Island Yacht Race.

Frantic, skippered by Michael Martin from Lake Macquarie Yacht Club, had not been in radio contact with the race organisers, Gosford Sailing Club, since the start of the 414nm race across the Tasman Sea last Saturday.

The 11.9m Sayer-designed sloop was sighted about 200nm east of Newcastle on the NSW Central Coast and about the same distance southwest of Lord Howe Island. She was heading under sail back towards her home port.

“The Cessna aircraft was able to fly low enough to be certain that the yacht was not in any trouble and was making good time,” said Gosford Yacht Club president, Andrew McDougall in announcing the successful sighting of Frantic.

“I think, however, it will be a couple of days before they reach port.”

“The exercise underlines the efficient organisation set-up by the club to deal with situations in such a long ocean race, which takes the fleet across more than 400nm of open sea.

“Initially, when the yacht had failed to radio her position after two consecutive radio ‘skeds’, we asked Frantic to fire a white flare shortly after midnight on Sunday. The crew of Frantic responded correctly and the flare was sighted by another competitor, Polaris of Belmont.

“We assumed that Frantic was continuing to race, despite having radio problems, but this morning, with all racing and retired yachts now in port, we activated the second stage of our crisis management plan.

“After contact with NSW police and the Australian Maritime Safety Authority, a Cessna flew from Lord Howe Island to the area where we had plotted the yacht was likely to be, based on co-ordinates from a satellite tracker aboard the boat.

“The aircraft sighted the yacht about 3.34pm, with the pilot and observers satisfied that all was well aboard the boat and that she was heading home without any need for outside assistance.

“Fellow competitors already on Lord Howe Island were advised of the successful sighting of Frantic and of the crew’s wellbeing late this afternoon,” McDougall said.

The last racing yacht to finish what has been a tough race, with the fleet battling strong headwinds most of the way across the Tasman Sea, was the Gosford Yacht Club entry Polaris of Belmont, skippered by Chris Dawe.

The veteran yacht, which competed in the first Gosford to Lord Howe Island Race seven years ago, crossed the finish line off Lord Howe’s coral lagoon at 8.50am today. The retired yacht from Queensland, Charlie’s Dream, also reached the island.