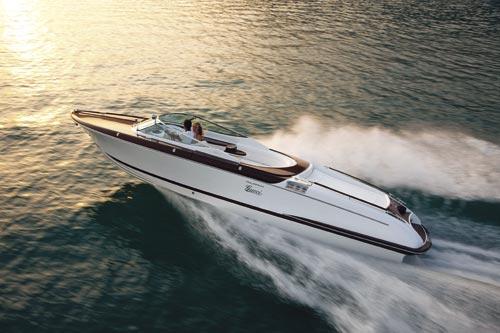 For decades, the classic wooden runabout has been the peak of chic for any self-respecting playboy or Bardot-esque sophisticat, and when the company launched the Aquariva runabout, it was an obvious nod to its classic forebear.

Roll on a few years, to Cannes, late summer, and in a large window display at the Palais des Festivals on the famous Croisette lay a merging of the Aquariva and yet another Italian design icon, Gucci.

The Aquariva by Gucci is a unique collaboration, undertaken in part to celebrate Gucci’s 90th anniversary year in 2011.

Customised by Gucci’s creative director Frida Giannini, the model takes the classic lines and construction of the Aquariva model and adds quintessentially Gucci touches, including paintwork in Gucci’s own glossy white, trimmings in the Gucci green-red-green motif, a unique green crystal windshield, and Gucci cottonware for the bedding. This is coupled with the trademark Riva varnished mahogany finishing and the result is a quite stunning example of the gentleman’s sportsboat.

Twin 380hp Yanmar engines deliver power via a two-speed electronic gearbox to a more conventional 41kts of performance, with a range of 150nm at cruising speed.

The boats, which are available as a limited edition and will all be built to order, even come with a set of exclusive Riva by Gucci accessories and luggage.

The Aquariva was launched at the Cannes boat show in September, and subsequently was the focus of a special presentation on the opening day of Milan Fashion Week.

A show boat will now embark on a world tour, taking in top boat shows and destinations throughout 2011.

If you’re hankering after one, though, be warned — they won’t come cheap. Unless, of course, you can find a knock-off version in the night markets of Hong Kong…

Photos: Gucci and Riva have created the ultimate fashionista runabout, the Aquariva by Gucci; Gucci adds creative flair to the sportsboats interior; and exterior styling; and throws in a special accessories pack.