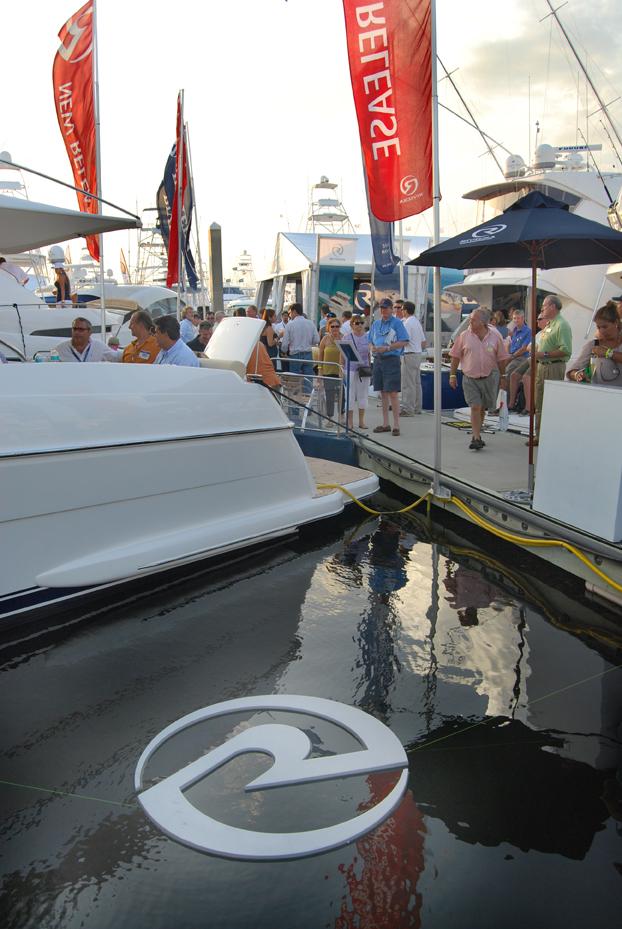 Riviera says it has achieved multiple sales across its range at the recent Fort Lauderdale and Genoa International Boat Shows.

According to the Australian boatbuilder, the Americas’ release of the new Riviera 43 Open Flybridge, the 5000 and 5800 Sport Yachts at Fort Lauderdale (Oct 28 to Nov 1) were extremely well received by the market with significant sales being achieved from both the Sport Yacht and Flybridge lines.

Riviera said its floating display showcased six of company’s latest designs and, as is par for the course for builder’s promotion these days, the I Luv Riv team greeted Americas and international Riviera owners and boating enthusiasts.

In the evening of day two of the show, Riviera said it hosted a cocktail party on its floating display for more than 250 VIP guests to mark the Americas release of the three new models. Guests were entertained by live music, while enjoying champagne, hors d’oeuvres and a balmy Florida evening.

“The new Riviera models both on display and those coming in 2011 have really excited boaters,” said McCafferty.

“We even sold a new 53 Flybridge and 61 Series II Flybridge at Fort Lauderdale. Both sales were off the plan, such is the confidence in the design and build quality of Riviera.

“Riviera’s optimism continues and the universal acceptance of our new models since their launch is extremely encouraging. We are now up to hull number 23 for our new 43 Open Flybridge, hull 25 of our 5000 Sport Yacht and hull 15 for our 5800 Sport Yacht. This is a truly remarkable achievement in the current market,” he said.

“Dealers from Europe and The Middle East came to Genoa with key clients to see Riviera’s latest models,” said Taylor.

“The European market has fallen in love with Riviera’s designs and the results from this year’s Genoa Boat Show speak for themselves.

“We have recorded strong sales between these two major international shows and with keen interest registered from across the globe; our latest designs really do tick all the right boxes.

“Riviera and its growing dealer network are proud of our new-model releases, all bearing the hallmark styling and impeccable multi-award winning Riviera build quality,” he said.