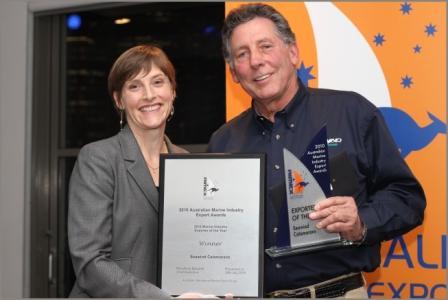 Richard Ward, Seawind Catamarans director said he was humbled by the acknowledgement and took the opportunity to state his appreciation for AIMEX as a necessity to the Australian marine industry’s success.

Seawind Catamarans is Australia’s largest and most successful designer and builder of ocean-capable cruising sailing catamarans and is now one of the most respected brand names in the sailing world, both in Australia and overseas, said AIMEX. “Seawind has always considered itself as a global company and export their models all over the world and, in 2009, these exports accounted for 40 per cent of production by dollar value,” it said.

Due to the high-calibre of award entries, AIMEX said Highly Commended Awards were given in many categories. In the category ‘Best Marine Industry Export Performance’ Aqualuma Underwater Lighting, GME and Ronstan International, all highly successful exporters with well-known international brands, were awarded High Commendation for their Export Marketing Strategies.

‘Best Marine Industry Export Performance’ in the Small Category (export sales less than $500K) was awarded to Ark Corporation. AIMEX said Ark has persisted and continued overseas exposure through trade shows, their website and various other media channels. “Ark has established distribution of their product through seven countries. Export sales represent approximately 2.7 per cent of their overall sales,” it said.

AIMEX said South Australia based Hydrive Engineering won ‘Best Marine Industry Export Performance’ in the Medium Category (export sales between $500K and $2 million). “Hydrive Engineering, a global leader in the field of boat steering equipment, boast half of HyDrive Engineering’s production staff and all sales and management are involved in their export efforts,” it said.

Following closely behind, Britton Marine was awarded a High Commendation award in that category. AIMEX said Britton Marine, which has a solid international reputation, is a major supplier of inflatable craft for the Australian and New Zealand navies and has also designed, built and patented diesel-driven large firefighting pumps for military applications. “In the last six years, Britton Marine have successfully developed markets in UAE, India, Bangladesh, Malaysia, Philippines, Indonesia and New Zealand,” AIMEX said.

The award winner for ‘Best Marine Industry Export Performance’ in the Large Category (export sales of more than $2 million) was awarded to Tasmania’s Muir Engineering.

“Muir Engineering is a leading global manufacturer of marine anchor winches and windlasses, anchoring and docking systems, and deck equipment for super and mega yachts, pleasurecraft, fast ferries and commercial vessels from five to 140m in length,” said AIMEX. “In 2009, Muir’s export sales were 74 per cent of their total sales.”

Managing director of Muir Engineering, John Muir was awarded ‘Marine Industry Export Champion’ for his significant service and contribution to the marine industry, considered still at the ‘coal face’ of his business where he has been for the last 40 years.

AIMEX said Marine Sanitation was awarded Winner of the ‘Most Environmentally Friendly Marine Industry Exported Product’. “Marine Sanitations service is to provide the design, manufacture, installation and servicing of both the dockside-discharge units and the portable toilet emptying units.