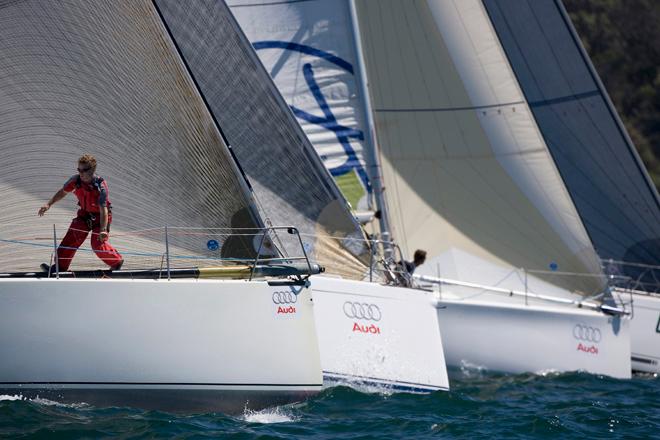 Commenting on the high level of entries, vice commodore and chairman of the Sailing Committee, Garry Linacre said: “It is great to have so many competitors in this year’s race, proving its popularity as a feeder race to other northern regattas such as Audi Hamilton Island Race Week.

“We have again seen a number of new boats enter — whether they are brand-new builds, first-time racers with the CYCA or new yacht owners who have updated their yachts,” he said.

Audi Australia’s managing director, Uwe Hagen says the company is looking forward to the start of the event, and seeing the strong number of entries, the brand is convinced this ocean race is one of the highlights of the CYCA program supported by Audi.

“There’s a strong mix of the big, fast maxis and the smaller, highly competitive yachts, which will no doubt see the final result a close call at the end of the race,” Hagen said.

“It’s also good to see that many of the yachts entered in the Audi Sydney Gold Coast Yacht Race will then head up to our final event of the year, Audi Hamilton Island Race Week at the end of August,” he said.

All eyes will be on Sydney Harbour at 1pm on Saturday, July 31, when the 384nm Audi Sydney Gold Coast Yacht Race commences from a start line off Nielsen Park, then proceeds out to the heads and turns left for the Gold Coast, finishing just off Main Beach, Southport.

The CYCA’s yacht-tracker system allows members of the public and media to follow their favourite yachts throughout the race. Each yacht is fitted with an Inmarsat D+ transmitter, which automatically updates the yacht’s latitude, longitude, course over ground and speed over ground — and transmits that information via satellite and then onto the race website http://goldcoast.cyca.com.au

In addition to showing each yacht’s position, the yacht-tracker system also shows the distance to finish line, as well as its progressive corrected time position under the IRC and PHS handicap divisions.

Audi Australia together with ONE HD, Australia’s only dedicated free-to-air digital sports channel, will show highlights from the Audi Sydney Gold Coast Yacht Race on Monday, August 23 at 8.30pm on ONE HD, as part of the four-episode wrap of the Audi IRC Australian Championship. — By Jennifer Crooks