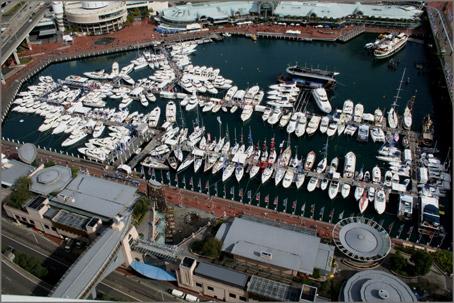 SIBS - The Facts And Figures

Unless you have been maintaining an extremely low profile, you’d be well aware that the 43rd Sydney International Boat Show is rapidly approaching.

In fact, it’s only days before the doors are thrown open at Darling Harbour for the action-packed extravaganza that is the Sydney International Boat Show.

For five interest-filled days (July 29 to August 2), Darling Harbour will present as the Australian boating industry’s ‘shop window’, when millions of dollars worth of boats and assorted marine equipment goes on display.

Organisers said there’ll be nearly 1000 boats on display, with 213 currently confirmed for the Cockle Bay Marina and another 700-plus within the halls of the Darling Harbour Exhibition Centre.

The marina on the waters of adjoining Cockle Bay demands another dash of exercise, said officials, made from an existing 48-berth structure with additional, specially-built marina arms added, the components of the marina, if locked together, would measure another 2km.

As for the vessels, lined up bow to stern, the line would reach from Cockle Bay to the Sydney Opera House, SIBS said.

“Needless to say, bringing such a major exhibition to readiness is no simple task. In the loading docks, where exhibitors and their staff unload the vehicles bringing product for display, it has been estimated there will be more than 2100 vehicle movements,” said SIBS. “That takes many hands; more than 5500 people are involved in setting up and operating the show.”

The Sydney International Boat Show has become a major occupant of the harbours city’s annual calendar of events, and according to organisers, Sydney people embrace the exhibition, as since its inaugural year in 1968, 3,020,077 people have flocked to the Darling Harbour site.

“The Sydney International Boat Show is the only recreational boat show in the Southern Hemisphere ever to approach the ‘magic’ 100,000 attendance figure, topping more than 93,000 just a couple of years ago,” said SIBS.

This year, organisers are anticipating 80,000-plus to turn up for the show.

Some other statistics of interest, although not specific to the boat show, include:

SIBS described itself as an entertainment spectacular with a nautical theme and there’s something of interest for every member of the family.

For more information and to book tickets on-line (and save a dollar), phone the recorded information line on 1300 7 26287 (BOATS) or visit www.sydneyboatshow.com.au