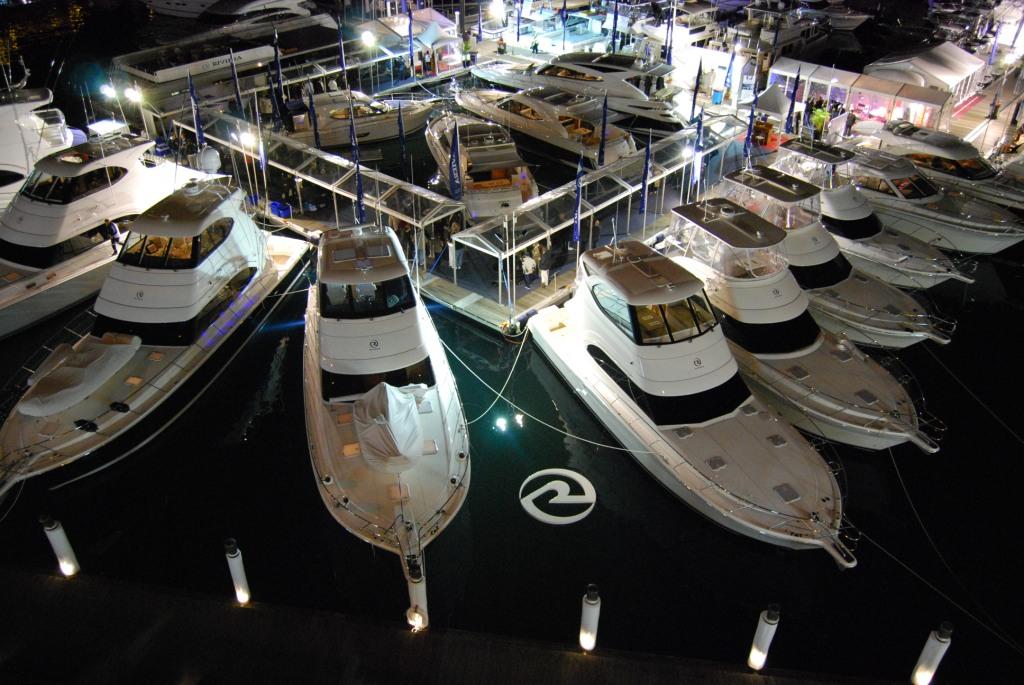 The new Riviera 43 Open Flybridge with IPS will head Australian pleasureboat builder’s display at the Sydney International Boat Show (starting July 29) where another new model will be announced.

Riviera CEO John Anderson said Riviera’s latest models had been well received and the market is eagerly anticipating what the next new model will be.

“The sales performance of our new models including the 5800 Sport Yacht, 5000 Sport Yacht, 51 with IPS and now the 43 with IPS have all generated a significant volume of sales,” Anderson said.

Veteran bluewater sailor and Melbourne businessman, Ian Reynolds will be the guest of honour at the Riviera display with his 56 Enclosed Flybridge, Investigator IV, the vessel he used to circumnavigate Australia, which will be on display and open for inspection.
Meet Ian and discuss with him his voyages and learn from his immense experience.

Riviera said Reynolds, at the age of 79, embarked on the challenging task of circumnavigating Australia, some 9000nm, clockwise from the Gold Coast returning home in October 2008.

But before he could make this dream of circumnavigating Australia by powerboat a reality, Reynolds and his crew made the 842nm voyage from the Gold Coast to Lord Howe Island as a shakedown cruise for testing systems and checking fuel and range calculations in his new 56 Enclosed Flybridge.

His most recent challenge, aged 81, was the month-long voyage, a total of 1380nm, to Papua New Guinea for the second annual Louisiades Rally.

Reynolds will share his experiences with people visiting the Riviera display, which also feature 12 boats, offering a range of Flybridge, Sport Yacht and Offshore Express models valued at more than $12 million.

Riviera said the new 43 Open Flybridge, never before seen in Sydney, was a real head turner at the Sanctuary Cove International Boat Show in May, where nine of this new model were sold in four days.

According to the builder, the new 43 exudes luxury and style and has been built with entertaining and long-range cruising in mind.

The oversized cockpit features an optional electric barbecue centre with sink, storage and rubbish bin shoot, giving boat owners a gourmet kitchen on your transom.
The large cockpit also includes a mezzanine seat and wetbar located below the floating stairs that lead to the open flybridge.

Riviera said the flybridge features a two-pac silver dash to match the hull with forward glovebox for charts, mobile phones and keys. Touchscreen commands provide fingertip control while digital instruments monitor every aspect of the 43’s systems. The new design hardtop, which utilises a single support pole either side at the front of the flybridge and a stainless steel arch aft on each side of the hardtop, provides a contemporary profile to the boat while giving a commanding 360-degree view.

The cockpit floor has an electric lift, which raises the entire floor panel to give access to the two Volvo Penta IPS engines and battery banks.

A large sliding door and awning window opens the saloon into the cockpit, bringing the outdoors in and creating an alfresco dining and entertaining experience. The large U-shaped lounge is perfect for relaxing in front of the optional retractable TV.

The galley has plenty of storage and features solid-surface bench tops and quality appliances throughout.

There is sleeping accommodation for up to six in two large cabins. The sleeping options in the aft guest cabin include a double, twin sliding single beds that can slide together to form a double plus one fixed single bed and optional single bunk. The forward master stateroom includes a 2m long king-size island bed, cedar lined wardrobe and generous en suite bathroom.
Both the en suite and second bathroom feature solid-surface benchtops, raised porcelain sink and separate shower stall.

Riviera said the 43 Open Flybridge features the latest technology in the form of the propulsion system, digital switching and lighting. The Volvo Penta Inboard Performance System (IPS), it said, offers a range of advantages such as impressive acceleration and performance, greater fuel economy and lower noise and exhaust levels, as well as a joystick control mounted at the helm, allowing for finger-tip control for close-quarters manoeuvring.

Digital switching from CZone provides access to five pre-set configurations with just the touch of a button — day cruise, day entertainment, night cruise, night entertainment, and at dock unattended. Riviera said that at the press of a button CZone then automatically selects the appropriate equipment and desired settings for each category allowing you to control everything from tank monitors, data and gauges to lighting and electronics.
CZone is a revolutionary solid state Controller Area Network CAN-bus design that allows for the ultimate in customisation and finger-touch control of all aspects of electrical systems operation, from entertainment lighting to navigation equipment, said the builder.
“In fact, CZone talks the same data language as the Volvo Penta IPS system, so all your engine parameters are metered through the same monitoring system,” Riviera said.

“New LED lighting on the 43 offers a spectacular range of internal, external and underwater lighting options, which are extremely energy efficient. With its power consumption less than a tenth of halogen lights, this new range allows boat owners to have more lights while saving on power consumption,” added the company.

The floating Riviera display will be at the southern end of the Cockle Bay Marina, Darling Harbour from July 29 to August 2.