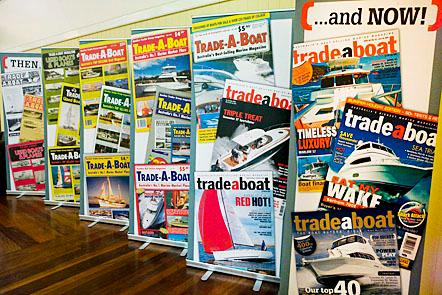 400
th anniversary edition celebrations remain a highlight of last month’s Sanctuary Cove International Boat Show. The soiree brought the boating industry together like no other magazine has done before, with a crowd of more than 250 taking time out to toast this publishing feat.

We reflected on Trade-a-boat’s colourful past, as depicted by a series of timeline cover posters, before tipping our hats in recognition of the 400th edition — a mighty 520-plus page tome — and looking forward with collective confidence to a bright future ahead.

The movers and shakers of the marine industry, throngs of faithful supporters and advertisers, and a lucky couple of readers graced us with their presence. Trade-a-boat was represented by our captain and CEO, Keith Falconer and Associate Publisher Travis Godfredson, Editor David Lockwood, national sales staff, key contributors, and our tireless marketing and promotional teams including suitably attired sailors on the night.

While we offer a multimedia platform, our magazine remains a favourite place to buy and sell your boat, to source expert opinion, read conclusive boat tests, catch all the latest news and gear, and extend your skills base through our top tuition, hands-on instruction, and money-saying DIY tips.

But Trade-a-boat wouldn’t be the success it is today without your great support. So we tip our hat
to you. We now have a pictorial record of the wonderful 400th anniversary night. Enjoy the gallery and, on behalf of the crew, thanks for celebrating Trade-a-boat’s 400th edition.

1. Covers from across Trade-a-boat's long history were shown off at the event

5. The gents from Noble Boats dropped in - Jason & Robert Lee

9. The gang from Mercury Marine - including Dave, Nick & Anthony

10. Col, Sonya & Nick from Sunshine Coast Yacht Sales with Mary, Carol & others from the Windcraft team

12. The crew from
Cunningham's Marine
flanked by Aaron and Ian from Trade-a-boat

15. Glenn from Twin Disc shares a moment with Chris & Murray from MEC Yachts

18. The gents from R Marine New Zealand popped across the ditch to join in the fun

19. The good folk from Grand Harbour Motor Yachts get into the swing of things

20. Hamming it up for the camera - lots of folk got themselves some souvenir photos as a memento of the evening

21. The Performance Boating gang enjory a night out - Rick & Rob at centre

22. Sam from Musto with Ian and Shane from the magazine

24. The crew from TMQ Electronics having a good time

25. Tony from Trade-a-boat with the Bavaria Yachts crew

26. The team from Arrowcat with Di & Aaron Goodchild

29. David from Sunshine Boat Sales & others with John Zammit

31. Coni from Sunseeker won a stunning watch on the night

34. Grant Torrens (third from right) with wife Sharon their children and staff enjoy the Trade-a-boat hospitality

36. Trade-a-boat's stand was a big hit at the show