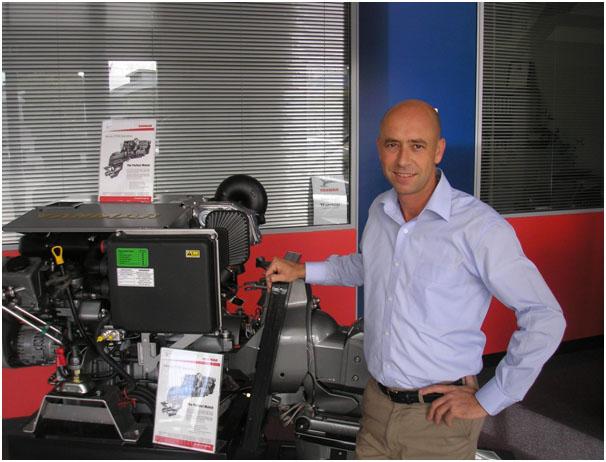 Yanmar engine distributor, Power Equipment, has announced the appointment of Paul Edwards to the position of Marine Sales Manager WA/NT.

Power Equipment’s new Auckland subsidiary Whiting Power Systems (WPS) was recently appointed as the official Yanmar Distributor in NZ and, in his new capacity, Macken will be overseeing Yanmar Marine sales across the country.

“Thanks to my past position at Sea Power, I am well familiar with the Yanmar products and the strength of the Yanmar brand,” said Edwards.

“At Sea Power I helped customers with their marine propulsion requirements. My role was to ensure that customers had the most appropriate engine for their needs.

“So I was measuring up enginerooms to be certain that the selected engine would fit, to be sure that the power was right for the vessel and then once the fitup was complete, I was involved in sea trials to see that everything was operating as specified,” he said.

Edwards’ new role is not too far removed from his previous position, one which he served in for almost seven years, said Power Equipment.

“The main difference at Power Equipment is that I only deal in Yanmar engines and now have responsibility for WA plus the Northern Territory.

“Dealer development together with growing the Mase Generator and Gori Propeller product range are key parts of my role.

“The market that we service is not a volume market segment; every application is almost a custom job, which makes our work interesting and varied,” he said.

Power Equipment said that after a relatively short time in the position, Edwards has already noticed how well the Yanmar brand is accepted by the market and its popularity in the repower sector.

“The brand is really strong and customers don’t need to be told much about the brand at all,” said Edwards.

“My job is to ensure that customers have access to the most appropriate Yanmar engine for their boat, whether new or a repower,” he said.

Edwards has a broad role that involves sales support, dealer support, liaison with shipyards and an involvement with naval architects to ensure that appropriate Yanmar engines are used to power new and vessels undergoing repower, Power Equipment said.

According to Michael Blair, the National Marine Sales Manager for Power Equipment, having Edwards join the WA state office is a coup for the company and customers alike.

“Across the country we are very fortunate to have experienced and very competent sales application engineers assisting our clients and I have absolutely no doubt that Paul will further complement this part of our business.

“Paul comes to us with a high level of industry knowledge, experience with our customer base and an appreciation of the task at hand,” Blair said.