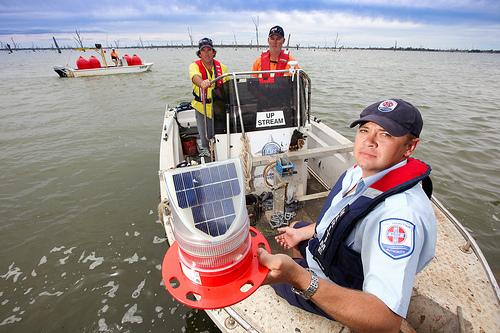 The NSW Government says safety on the Murray River’s Lake Mulwala is being improved with the installation of state-of-the-art navigation buoys and lights.

NSW Minister for Ports and Waterways, Paul McLeay, said the safety improvements totalling $180,000 were the biggest-ever single investment in navigational upgrades in the Murray River area. A system of 71 buoys, 56 with remote-controlled, solar-powered LED lights will mark the Murray River channel within the lake.

“This upgrade demonstrates the importance of Lake Mulwala (on the Victorian-NSW border), which is an increasingly popular destination for boaters and recreational watercraft such as jetskis and skiers,” said McLeay.

“The ongoing drought has resulted in falling water levels and an increase in submerged hazards in the lake.

“There has also been an increase in use of the lake at night, and this rise will continue with ongoing development of the Victorian foreshore areas.

“In response to these changes, we reviewed the safe navigation marking system, which has been there for more than 15 years.

“In consultation with the Lake Mulwala Safe Boating Committee and in partnership with Australian Maritime Systems Limited, NSW Maritime has developed a new plan for the lake.

“This safety plan includes installing navigation aids, including lights, in the deeper main river course and removing some of the established cross channels.

“The new navigation aids are also energy efficient, converting sunlight to an electrical current used to charge the battery which operates the light at night.

“The lights will be set in a flare pattern, which will appear like stepping stones as they come on and go off sequentially. This will provide a more visible and discernable pathway for night navigation.

“However, navigation aids are just that, aids, and it remains the skipper’s responsibility to remain vigilant in maintaining a proper lookout at all times.

“From time to time unpredictable hazards occur in the main channel, including floating debris, and masters should operate according to the conditions, maintain a safe speed and wear a lifejacket at night,” McLeay said.

Photos: NSW Maritime Boating Safety Officer, Tim Peverell, with one of the new remote-controlled, solar-powered LED navigation lights for Lake Mulwala. At the steering console are Darren Kennedy (left) and Shaun Callinan, navigation technicians with the contractor Australian Maritime Systems. (photo © Simon Dallinger Photography); Laying one of 71 new marks, the result of a review by NSW Maritime of the marked-channels network on Lake Mulwala. Ongoing drought has resulted in falling water levels and an increase in submerged hazards. (Photo © Simon Dallinger Photography).