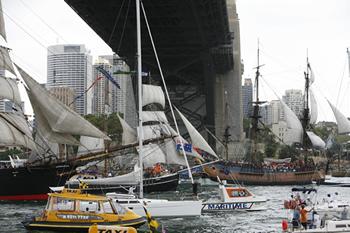 A busy schedule of boating activities and events is planned for NSW waterways on Tuesday, January 26, to celebrate Australia Day 2010.

Sydney Harbour will be a focus of activity, with the day’s program including a ‘Best Dressed Vessel’ competition sponsored by Sydney Ports, with cash prizes of $500 each for the winners in four separate categories.

The AAMI Ferrython starts at 11am, while the ‘Tall Ships Race’ starts at 1pm.
A series of aerial displays are then scheduled throughout the afternoon, and the Sydney Ports Jazz on the Water Concert kicks off at 4pm. The best viewing location will be in Johnstons Bay.

From 7-9pm the Darling Harbour Australia Day Spectacular show of light, sound and fireworks will provide a grand finale.

Yacht racing events include the Cruising Yacht Club of Australia’s Short Ocean Race from Sydney Harbour to Botany Bay and return, which starts at 11am. The 174th Australia Day Regatta takes place throughout the afternoon from 1.15pm, with events for all classes of yachts and historic 18ft skiffs conducted by the Royal Sydney Yacht Squadron on behalf of the Australia Day Regatta Inc.

Australia Day satellite regattas will also be held on the Parramatta and Lane Cove Rivers, at Manly and Rose Bay, and on coastal waterways and lakes.

In the interests of safety, special traffic coordination arrangements with exclusion zones and navigation restrictions are planned for each of the major events on Sydney Harbour. When moving throughout the Harbour, skippers must observe the six knot ‘no wash’ speed limit near the exclusion zones around tall ships, ferries and other key vessels.

NSW Maritime is also urging caution in relation to passive craft such as kayaks, canoes and surfboats. The congested area within 100m of exclusion zones is considered unsafe for passive craft.

Skippers are reminded to ensure everyone has a lifejacket, to be mindful of fatigue and sunburn, and to keep under the 0.05 alcohol limit. They must also ensure they have appropriate working navigation and anchor lights, particularly for night-time events.

There are several quiet spots for relaxing. Rest spots include Berrys Bay and Snails Bay to the west, and Taylors Bay and Athol Bay to the east.

NSW Maritime’s free booklet Sydney’s Aquatic Events — A Boating Guide 2009-2010 has maps and details for all the major summer events including Australia Day. it can be obtained from NSW Maritime offices, harbourside fishing and boating clubs, marinas and chandleries, as well as online at www.maritime.nsw.gov.au.