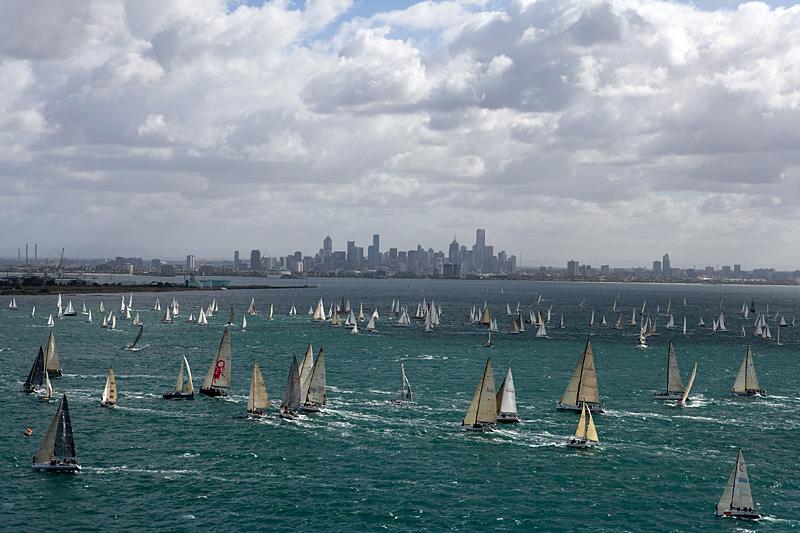 The Royal Geelong Yacht Club is thrilled to announce a huge fleet of 440 yachts for next week’s Audi Victoria Week (January 23 to 26), Australia’s largest regatta.

“Once again the multi-faceted event has attracted a huge range of Australia’s best sailors chasing their share of the silverware, as well as those who come to enjoy the action on and off the water,” said regatta chairman and RGYC vice commodore Andrew Neilson.

“As usual we have made a few changes to freshen things up including adding a production division to the Docklands Invitational event, and adding another off-the-beach class, the Formula 18s, with 25 18-foot skiffs from around the country making their way to Geelong to add plenty of razzle dazzle.

“With Audi coming on board as the new naming rights sponsor of the event, this is the start of a new era. We acknowledge their involvement as well as all our support sponsors,” said Neilson.

During the 166th staging of the longstanding regatta, Victoria’s capital city Melbourne and largest regional city Geelong will host more than 4000 sailors and their families.

The weeklong event comprises the Docklands Invitational (five race series, Jan 21 to 22), an invitation-only event; King of the Docklands (Jan 21 to 22), a knock-out event aboard the SB3s for all divisional winners from the past two year’s; and finally, the Audi IRC Series starting with the colourful passage race from Melbourne to Geelong on Saturday, January 23.

Among all the other classes starting in the Passage Race are the big multihulls that normally beat the IRC yachts to Geelong. The ‘multis’ start their series in the lead-up to the Passage Race.

The largest cruising fleet ever, 212 when entries closed, has added plenty of weight and colour to the Audi Victoria Week starting list.

Among the Classics contesting is Granuaile, an Irish 18m James Edward Doyle design that was built in the early 1900s as a transatlantic racer. More recently she has worked as a charter boat on the Franklin River in Tasmania.

While the Classics are about history and grandeur, the International Moths and the Formula 18s are about the latest in design and construction, and will be the fastest of the classes as they skim across Corio Bay starting Saturday week.

Ten Sydney 38s will race in their one-design format with the first over the finish line taking the win, making for spectacularly tight racing among a very competitive fleet. The mostly Victorian entries will be looking for the home advantage over the Andrew Corletto’s South Australian Shining Sea and Ray Sweeney’s Queensland entry Mondo.

The Sports Boats division is the biggest on record, 23, and boasts a super strong Melges contingent of seven as well as seven Thompson designs for what should be a tight National Championship series.

The absence of the 60-footers such as Loki and Limit have paved the way for the 50-footers to add their touch of grand prix glamour to the line up, Audi Victoria Week sailing administrator, Rob Hampshire describing the fleet as “about as red hot as you can get anywhere in the country”.

A huge team of yacht club staff, volunteers, and sailing administrators are gearing up to host the massive event, which last year attracted 457 entries. Hampshire estimates close to 250 people will be involved in race administration and logistics at Docklands and Geelong.

In addition to a great racing program, the shoreside program boasts a bumper mix of entertainment and activities.

The annual Bay FM Fireworks Spectacular will light up the sky on Monday, January 25, choreographed to music and are always a highlight. There is also the free William Angliss Go Sailing program, allowing people of all ages and abilities a chance to test the waters with the aid of a qualified instructor off Eastern Beach.

Follow the action daily and view images, video and full results at www.victoriaweek.com

Race series and championships contested at Audi Victoria Week are the: