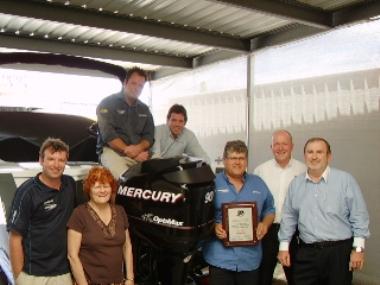 “So I would like to publicly thank Peter Kent and his team at Regal Marine for being such an important part of the Mercury business for so many years,” he said.

“Passionate and knowledgeable dealers like Regal Marine are critical in this game — the marine industry is not an easy one — and for Peter to have succeeded for so long tells you a lot about the excellent business he’s running.”

“It’s been a great ride,” said Kent. “Mercury was ahead of the game then and they’re ahead now, which is one of the reasons why we’ve survived,” he said.

“I’ve got a lot of loyal clients who are happy to buy Mercury time and time again because they know they’re getting quality.”

Kent said it was very appropriate that John Temple was the one who came to the dealership to congratulate him.

“It was fitting because John was at Mercury when I joined 30 years ago,” he said.

“There’s a lot of longevity at Mercury which is a good thing, it’s reassuring for dealers and clients.

“Milestones like these are great but you don’t reach them by yourself, so I’d like to thank John and the people at Mercury for all their help, as well as my own team here who really do a great job.”

PHOTO: Winners are grinners after 30 years (all names are left to right).