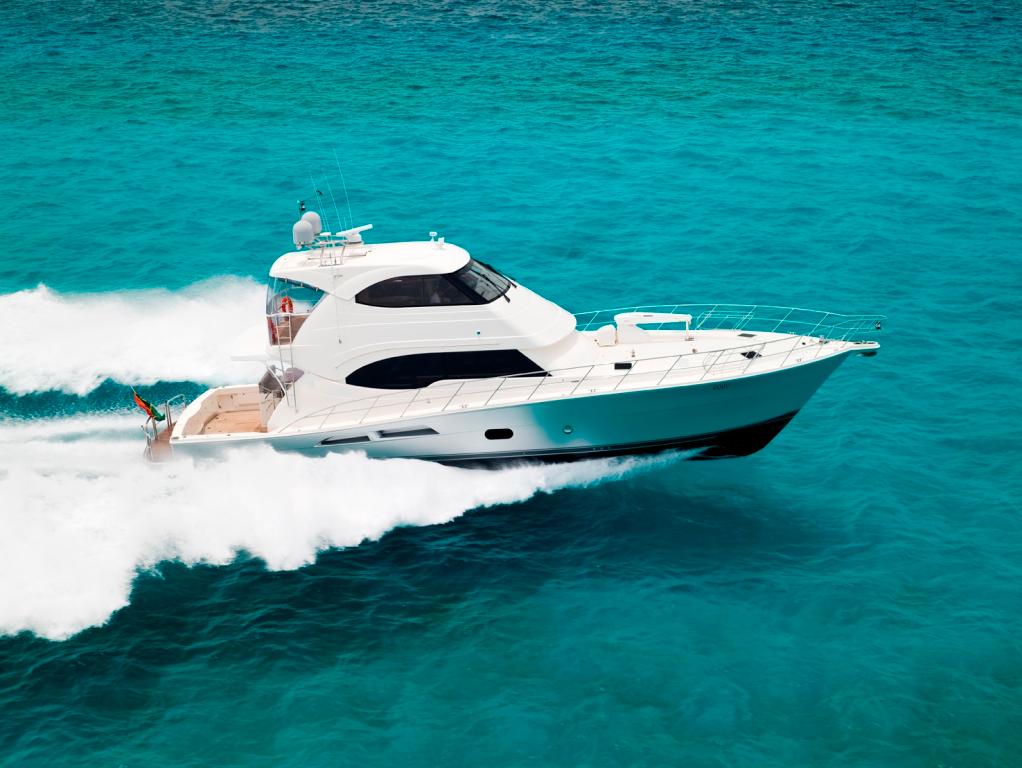 Riviera says Christmas has come early this year for two of its loyal owners, taking possession of their brand-new 70 Enclosed Flybridges, both customised to the hilt and representing more than $12 million in sales for the luxury Australian boatbuilder.

The first 70, which Riviera describes as Australia’s best-equipped luxury gamefishing cruiser Born to Battle now belongs to an elated Peter Teakle, who set out to create the ideal home-away-from-home for cruising and competing.

“In actual fact, this will be our new home,” Teakle says referring to his equally zealous fishing companion and partner, Nina.

“We spent two years waiting for her and one year planning every detail from a clean slate.

“We’ve made sure we have two of everything for back-up given the places we intend to cruise — two desalination units, two generator sets, two freshwater pumps, two bait tank pumps and two air-conditioning cooling pumps,” he said.

In his 50,000nm over 20 years and six Riviera’s, the boatbuilder said Teakle has learned what details make a great gamefishing boat, combined with those features that top it off as a thoroughly exquisite cruising boat.

Riviera said the “energetically retired” Teakle plans to cruise The Whitsundays, exploring its 74 islands and seriously competing in the annual Lizard Island Game Fishing Tournament in which he was instrumental in changing the format to a tag-and-release competition.

“So enthused is Teakle with his latest addition, his new 70 is painted in his trademark colour scheme of black hull with black and gold detailing to the superstructure, that he has barely had the keys two days before taking off to his home port of Hamilton Island,” said the builder.

Born to Battle is decked out with more than $1 million in extras, from the upgraded MTU engines boasting nearly 4000hp, and an ice chipper that blasts out 12kg of ice per hour, to $500,000 in Furuno electronics, controlled by a mouse in the skipper’s helm chair. Among the more exotic extras are water-sensors that operate the windscreen wipers, said to be inspired by the same technology in Teakle’s BMW 7 Series.

Teakle’s new 70 is his fourth boat to be equipped MTU motors, “effectively Mercedes Benz” he says of the German engineering, in this case two 1920hp engines. Riviera said the MTUs’ massive exhausts were sourced from Italy by the owner and all up, the engineering of Born to Battle is the most advanced in Australia and truly world standard.

Also installed, for comfortable cruising and extra stability during offshore tournaments is a gyro stabiliser system, which the boatbuilder claimed virtually eliminates low-speed boat roll, at anchor and underway. “The best thing about it, besides stabilising the boat, is that nobody will get seasick,” said Teakle.

According to Riviera, Teakle and his partner have designed the internal layout to suit the dual purpose of Born to Battle, the floor plan featuring a galley aft, flowing out to mezzanine seating and cockpit, plus a detachable boarding platform that can be removed for serious, competitive gamefishing.

The lounge area is forward of the galley and consists of two generous-size tables on either side of the boat, both featuring wraparound seating in soft beige leather.

Riviera added there’s also a matching leather bench seat capable of seating up to five adults adjacent to the impeccably equipped galley, but to call it a ‘breakfast bar’ is like calling Born to Battle a barge.

Sleeping eight in four cabins, the boat was specifically designed for two couples and three full-time crew. There is a palatial full-beam master suite, a guest double stateroom
with en suite and the third cabin has been converted into an office housing Peter’s gadgets, computers and storage for all manual this technically-advanced boat has. At the bow are two spacious crew cabins and a fourth bathroom.

Riviera said no detail has been overlooked, from the teak woodwork throughout, Amtico floors (“I hate carpet in boats!” exclaims Teakle), and a neutral palette that owes a lot to Nina’s Swedish origins.

Teakle's 70 was officially handed over this week by R Marine Queensland, located at the company’s manufacturing facility at Coomera on Queensland’s Gold Coast. But prior to its presentation Born to Battle was put through its paces by Steve McPherson from R Marine, who went as far as spending several nights onboard out on the Gold Coast Broadwater to put her and all of her machinery and equipment through a series of thorough tests.

“I have dealt with Steve for the past eight years. In the case of Born to Battle, Steve took care of everything to do with management of the build,” said Teakle.

“He made sure that before handover, all the appliances worked with no hint of a rattle or buzz. In one instance, Steve wasn’t happy with the size of the tool box in the engineroom, so he replaced it with a bigger one. That attention to detail sets Riviera apart from every other boat brand,” he said.

The boatbuilder said the other Riviera 70 that is enjoying its finishing touches in preparation for delivery, is bound for New Zealand and due to be handed over by Bruce McGill and his team from R Marine in Auckland before Christmas.

The owner, his crew, and Bruce McGill intend to cruise the boat to her home port in Auckland early in the New Year. Their delivery trip will take them 438nm from the Gold Coast to Lord Howe Island for some serious exploring, where they will refuel for the 800nm passage to NZ.

Riviera said the 70 boasts a cruise speed of 30kts, a top speed of 35kts and a range of 1000nm. The company said it has built and launched five of its new flagship Riviera 70s, and more like custom builds than production boats and nearly qualifying for superyacht status.

Photos: The Riviera 70, now five strong and more planned for 2010 says the builder; Santa aka Riviera's Director of Brand and Communication, Stephen Milne, hands over the keys to Born to Battle to new owner Peter Teakle and partner Nina; Riviera said the galley aft was just one of the myriad custom features to Teakle's Born to Battle; The master stateroom; The 70's cockpit mezzanine is the ideal space for entertaining in style and watching all of the gamefishing action.