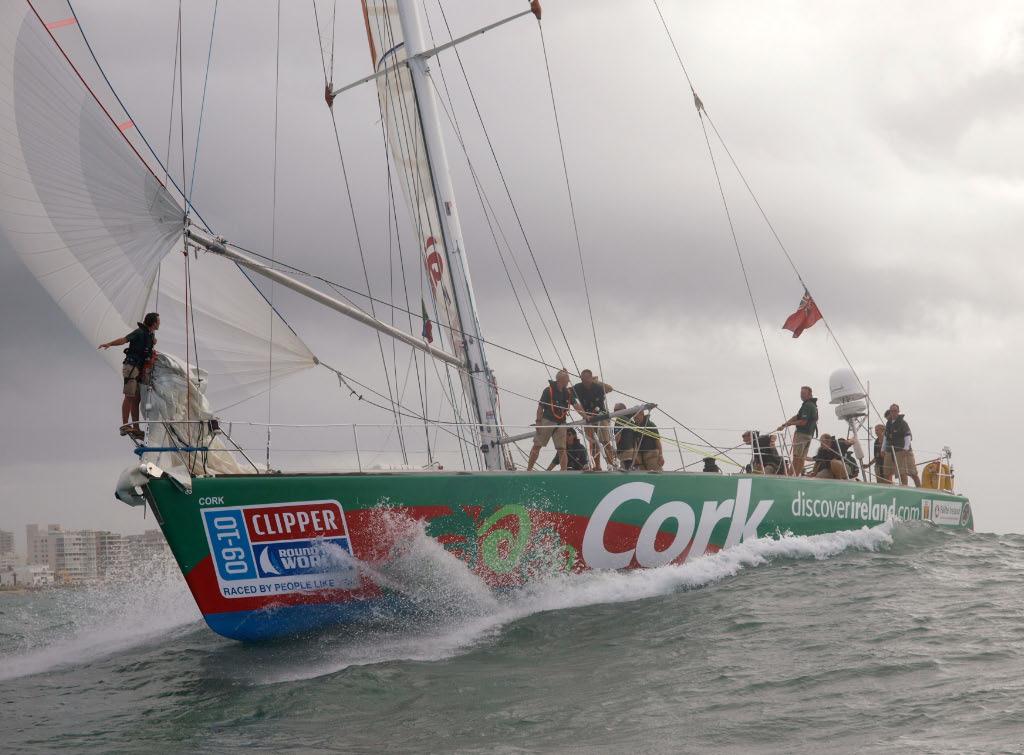 November 12: The jubilant crew of Cork, Ireland, has arrived in Cape Town after taking victory in Race 3, the South Atlantic leg, of the Clipper 09-10 Round the World Yacht Race. They crossed the finish line in Table Bay at 1638 local time (1438 GMT), accompanied by a pod of dolphins surfing down the face of the waves.

Earlier in the day the cloud had lifted to reveal the iconic shape of Table Mountain which dominates the Cape Town skyline, but it was in brooding conditions that the team crossed the line with Capetonian crew member, Marlon Jones, 20, at the helm.

Marlon, who started sailing five years ago at Cape Town’s Izivunguvungu Sailing Academy, joined the crew of Cork in Rio de Janeiro for the 3300nm race across the Atlantic back to his home city and his family was at Royal Cape Yacht Club to welcome him.

Beaming proudly Marlon said: “Helming over the finish line was great! I wanted to give the wheel to the skipper but he said no, I must keep it — it made me feel so proud. The whole thing was great fun — they made me feel really welcome and part of the crew.”

The Irish team, led by skipper Richie Fearon, has led the race for the last six days, working themselves into an unassailable position to claim their first win of the 35,000nm challenge of a lifetime.

Stepping off Cork onto the pontoon at Royal Cape Yacht Club an ecstatic Richie said: “That was absolutely brilliant — it’s great to arrive here first. It was hard out there; big seas and big winds and we pushed the boat good and hard. As a crew we came well together and I’d say we deserve it. We kept the boat going ahead of the others and I’m really chuffed.”

News of Cork’s victory has already reached the Irish Ambassador to South Africa. His Excellency, Colin Wrafter said: "This is fantastic, the crew have done marvellously well. They deserve a few good days in lovely Cape Town. I am so proud of them. Up Cork!"

The crew were entertained by a traditional Cape Town minstrel group, the Ghoema Entertainers. The colourful troupe are regulars in Cape Town’s unique annual minstrel competition and have also played at the opening ceremonies of the cricket and rugby union World Cups.

Competition among the fleet is fierce and a battle royal is being waged between Team Finland and Uniquely Singapore for second and third place. Both teams are expected to arrive at Royal Cape Yacht Club this evening.

The rest of the 10-strong fleet, including Jamaica Lightning Bolt, Hull & Humber, Qingdao, Spirit of Australia, Edinburgh Inspiring Capital, Cape Breton Island and California are due to finish in the next few days and are all expected in Cape Town by Sunday afternoon.

The whole fleet will move to the V&A Waterfront on Friday, November 20, where the yachts will be available for public viewing. The race will restart on Sunday, November 22, the yachts departing the V&A at 11am for start of the race from Cape Town to Geraldton-Greenhough, Western Australia, at 2pm.

The Clipper 09-10 Race started from the Humber on the north east coast of England on September 13 and will return there on July 17, 2010. It is the only event in the world where people from all walks of life can take on the challenge of a lifetime and race around the globe on stripped down 68-foot ocean racing yachts. A presentation for people interested in signing up for the next edition of the Clipper Race is being held at the Royal Cape Yacht Club on Sunday, November 22. Email oceanracer@clipperroundtheworld.com to book a place at the event.

Photo: Cork surfs to the line for Race 3 victory.