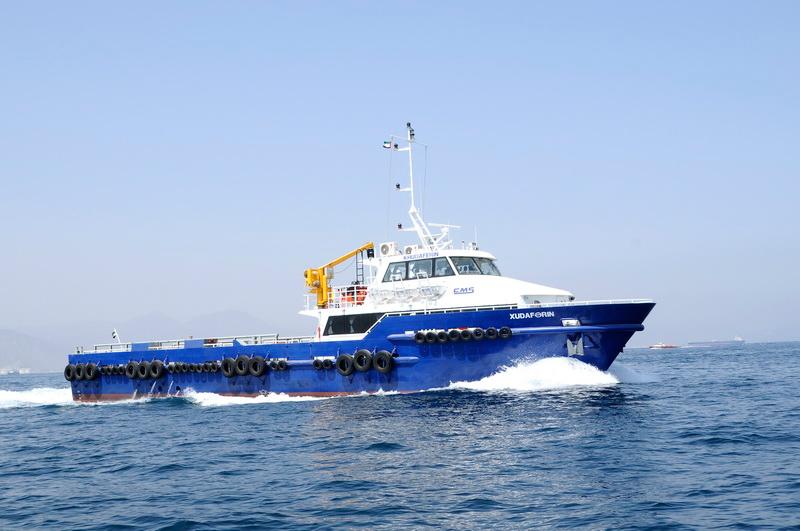 Araz
and Khudaferin have been launched by Topaz Shipbuilding at their Fujairah (United Arab Emirates) shipyard.

These 35m Monohull Crew Boats are the first two of up to five vessels to be delivered to Caspian Marine Services, with the third already under construction. The vessels are to be operated on the Caspian Sea from the Azerbaijan city of Baku.

Incat Crowther said the vessels are capable of carrying 62 passengers and 50 tonnes of deck cargo at a service speed of 18kts fully loaded. The vessels’ hulls are constructed of high-tensile steel, while the superstructures are marine grade aluminium. The two structures are joined with Triclad explosion-bonded composite strips.

The main cargo deck has an area of approximately 134m² and has been arranged to carry 3 x 20ft containers. A 11.7t/m deck crane provides self-loading capability for lightweight items. Forward of this open space, the main cabin contains seating for 54 passengers in a standard ferry-type arrangement.

Below deck is crew space capable of accommodating up to eight crew in four twin cabins. The crew space also has wash and mess facilities, as well as a fully equipped galley. The upper deck houses the main control stations, which feature forward and aft control stations providing excellent visibility around the vessel.

Powered by three Caterpillar C32 ACERT main engines, each producing 1450hp, the vessels have a service speed range between 16 to 18kts depending on load conditions. The vessels are designed to DNV R2 restriction, meaning they fully meet HSC/IMO damage stability criteria.

Incat Crowther said it undertook extensive modeling of all structure and systems, providing complete plate-cutting information and systems drawings. This it said greatly increased the efficiency of the build process by creating optimal runs for piping and electrical components, and reducing waste and errors in structural assembly.

“This efficiency has paid dividends, and the vessels were built to an accelerated schedule. The delivery path from the yard on the eastern coast of the UAE to the Caspian Sea involves the navigation of several inland seas, lakes, rivers and canals, including the Volga-Don Canal in Southern Russia,” said Incat Crowther. “Passage through the Volga River before the winter freeze was crucial to the success of the delivery.”

Topaz Shipbuilding achieved this requirement, said the builder, allowing Caspian Marine Services to profit from an
extra season of operation.

This vessel follows the success of Unlimited, a 24m utility catamaran designed by Incat Crowther for the same operator.

The new 29m utility Catamaran will be a 29m high-speed catamaran workboat capable of carrying 50 tonnes of deadweight. The aft deck, with a cargo capacity of 24 tonnes, is configurable for multiple uses. It includes a large moon pool for exploration services, securing points for 2 x 20-foot containers, a Heila deck crane (capable of lifting 6.7 tonnes) and a removable hydraulic 5-tonne A-Frame (including a reel winch).

As with Unlimited, Incat Crowther said the new vessel will feature a towing hook enabling the vessel to undertake lightweight tug duties. The vessel will have a bollard pull of 12 tonnes.

The main deck cabin houses the galley, lounge and crew mess area, along with two officer cabins. Wash facilities are also provided on this deck, one accommodating laundry facilities. Additional crew cabins are located in both the port and starboard hulls (bringing the vessel total to 12 berths), with a large pantry in the port hull.

The upper deck wheelhouse features crew and passenger seating and well equipped work stations, while the central helm seat affords good all-round visibility. Two wing control stations are fitted forward on either side with a tender/rescue boat situated aft within easy each of the deck crane.

The vessel will have a total capacity of 50 personnel, including the vessel’s crew. It will have an extended range, allowing the operator to reposition the vessel far more effectively.

Like its predecessor, Incat Crowther said the vessel will be built at Richardson Devine Marine (RDM) in Hobart, with delivery expected in early 2010.

“This vessel will build on the success of RDM’s commercial projects, and showcases the yard’s ability to offer custom-build solutions,” said Incat Crowther. “The vessel will become part of the fleet owned and operated by Offshore Unlimited, a Tasmanian company providing vessels to Australian waters with operations out of Dampier, WA and Mackay, Qld.”