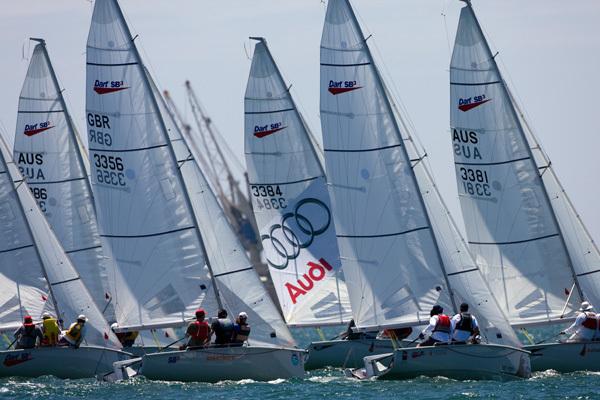 In a major coup, organisers of Audi Victoria Week said its venue, Geelong, has won the bid to host a prominent world sailing championship in January 2012.

The SB3 World Council has announced Royal Geelong Yacht Club will play host to the fifth world championship for the class — the first championship held outside of Europe.

The Dart SB3, crewed by a maximum of four, is said to be the fastest growing sportsboat fleet in the world. It is anticipated an 80-boat fleet will contest the championship with competitors representing countries including: United Kingdom, Italy, Portugal, Holland, USA, United Arab Emirates, China, Singapore, New Zealand and Australia.

The championship will be programmed to overlap with Australia’s largest sailing event — Audi Victoria Week. Event Chairman Andrew Neilson said: “This is the first world championship hosted by the 166-year-old event. It is very exciting for the club, the City and the state. It is also reward for our loyal band of sponsors who have displayed enormous faith over the years.”

Tom Rosoman, Business Development Manager of LaserPerformance, manufacturers of the SB3 said: “Finding suitable venues for World Championships is never easy. I am delighted the first SB3 Worlds outside Europe will be in Geelong, Australia. The venue and organisational team have a proven track record and clearly have all the bases covered.

“A fast growing class, the highest calibre of one design sailors in the world, sunshine and wind — a recipe for champagne sailing,” he added.

Organisers said by hosting a world championship, it reaffirms Audi Victoria Week as a premier international event and Geelong as a prime sailing venue.