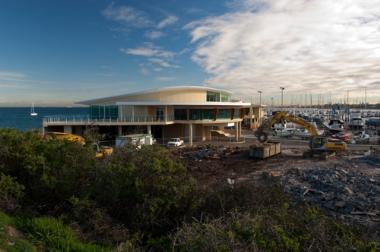 The Royal Australian Navy is to be at the forefront at the official opening of the brand-new Sandringham Yacht Club (SYC) premises in Melbourne this Saturday.

Sixty-one Navy personnel will play a key role in the opening, along with an expected attendance of 3000, made up of SYC members and their guests.

The Navy’s involvement at the opening is a fitting one. At the new training facility, into which the former Government injected $437,500, maritime careers are a big focus and include Navy career opportunities.

Captain Sheldon Williams, commanding officer of HMAS Cerberus in Melbourne will head up the large Navy contingent at the opening. Other personnel will include the Royal Australian Navy band, and divers in high-speed RIBS, who will demonstrate fast-water pick-ups.

The opening also marks the official start of the Summer Sailing Season. The Navy yacht, Charlotte, will take part in the Official Sail Past with SYC’s Off the Beach skiffs, the SYC Boating Academy’s Beneteau 7.5 One Design boats and followed by the strong racing fleet.

From a dream to reality, SYC’s Ian Whitbread, who is co-ordinating the official opening of the new Club and its facilities says: “It will be a wonderful and big day; the camaraderie and celebration of our new premises and the opening of the Summer Sailing Season.”

The public will not miss out either. Those wishing to view the exterior of the new SYC clubhouse and witness the on-water activities can do so from the various vantage points around the Club, including the breakwater and surrounding areas. Those with boats are encouraged to take to the water for a close-up look at the day’s events.

On November 14 and 15, the public will be invited to the Club for the Club Marine Sail Boat Show and peruse the new Clubhouse and training facilities.

Conceived 10 years ago, the new world-class Melbourne facility, costing $12.75 million, has a contemporary facade and interior and is being billed “as the most modern yacht club in Australia”.

Built on the pre-existing car park and hardstand and rigging area, closer to the waterfront on Port Phillip Bay, the new premises was designed with all the latest technology in mind by Richard Mabin & Associates and built by Kane Constructions Pty Ltd.

SYC’s new building takes up approximately 2700m² and features a training auditorium with meeting rooms; the Port Phillip Room, incorporating a dance floor and stage; a Members Lounge; the Olympic Room and Harbour View Restaurant with a casual lounge area and a semi-private dining area for larger groups with outdoor areas; and, the Club’s administration offices.

One of the first major functions to take place at the new premises will be the 2009 Yachting Australia Awards on Friday, October 16.